While I never watched the TV version of Reno 911! I was somehow always aware of it. It was a parody of the "COPS"-style TV shows that have become so popular over the last decade or so and featured some great comedy from two people I really enjoy seeing onscreen - Thomas Lennon and Wendi McLendon-Covey. Maybe if I'd seen some episodes I would have enjoyed it. Maybe not.

The plot sees our hapless police officers invited to a big event in Miami. It's not that they're special, or that anyone actually wanted them there, but the fact is that this time around everyone was invited. Things start off as you would expect - the group are mocked and their details can't be found on the system - but things swiftly turn around the next day when a terrorist attack leaves every other officer quarantined inside the main event building. Law and order must remain and it's up to the folks from Reno to uphold it. Uh oh.

Directed by Robert Ben Garant (who also co-wrote the thing with stars Thomas Lennon and Kerri Kenney - and, I'm sure, everyone who was able to improv some lines), this movie suffers due to the fact that every single character is just slightly too dumb to be amusing for an entire film. The cops are dumb, of course, but The Rock pops up just to be dumb too. Then we have a dumb, though still amusing, Scarface-inspired baddie played by Paul Rudd. Patton Oswalt, as Jeff Spoder, does reasonably well until the big finale, in which he also becomes pretty dumb. It's a symphony of stupidity and that's a tricky thing to get just right, which is why the movie falls down slightly.

There are many individual moments that cause laughs (the aforementioned appearance from The Rock is one while attempts to remove the body of a beached whale is another) but there are many other moments that pile on the crudity and nonsense without success. Lennon is consistently great, as are Wendi McLendon-Covey and Kerri Kenney, but the other main characters are either undeveloped or just plain unfunny.

With a cast that also features David Koechner and Nick Swardson, and even a small and amusing cameo for Danny DeVito, there's enough stupidity thrown around to make this a passable time-waster but it's not one that I'll choose to watch again. 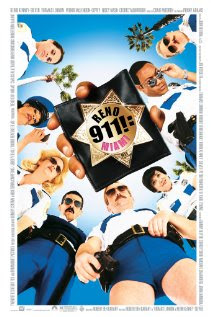