Alex de la Iglesia is someone that you should have heard of by now. If not, I urge you to explore his filmography. Not only did he direct this wonderful movie but he also created the bizarre and brilliant Perdita Durango and the dazzlingly brilliant The Last Circus.

The Day Of The Beast is yet another great slice of entertainment from this consistently enjoyable director (he also co-wrote the film with Jorge Guerricaechevarria) and it's a twisted comedy with a number of horror elements quite unlike anything you may have seen before.

The movie begins with a priest (Father Angel Berriartua, played by Alex Angulo) telling another priest that he has deciphered the message. He knows when the Antichrist is due to be born and he knows just what he must do to destroy it. And what he must do is commit as many sins as possible, that way he can get closer and closer to Satan and gain his trust until the moment comes when he can redeem himself. So he begins stealing from beggars, shoplifting, cursing at dying men, etc. He also gains a helper in the form of heavy metal fan Jose Maria (Santiago Segura) and the two men seek out an expert on the occult, Professor Cavan (Armando De Razza playing his character as some slick TV psychic, imagine a cross between Derek Acorah and Peter Vincent from the original Fright Night and you're close enough). Can they do all that is required of them in time to save the world?

Full of wonderful performances, great black comedy and special effects that may be far from perfect but certainly feel charming and in line with the overall style of the film (a real mix of traditional horror tropes and wonderful subversion), The Day Of The Beast is a treat for horror fans. As well as the leads already mentioned there are great supporting turns from these actresses - Terele Pavez, Nathalie Sesena and Maria Grazia Cucinotta - and everyone else who takes part.

The only reason that I don't rate it even higher than I do is because of the slight feeling of everything being thrown into the mix in a bit of a slapdash manner. That's not a major problem when the end result is so much fun but it still means that many moments feel completely unnecessary, a few plot points feel like the writers were either clutching at straws or smoothing over bumps without thinking viewers would notice and there's an overall lack of tension while things build to a so-so finale.

Don't let those criticisms put you off, however. Many people like this movie even more than I did and I still really liked it. I'd watch it again, many times, and I can't wait to add it to my collection at some point. 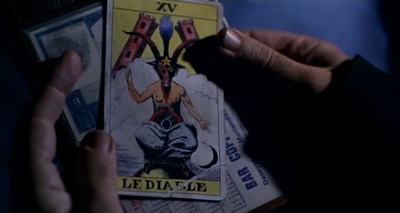