My fellow Flickfeaster, Tue, recently rewatched Stargate and this reminded me that it was available for my viewing pleasure. Despite trying to make my way chronologically through the filmography of Kurt Russell I felt that I owed it to myself to watch this movie ASAP and see how it held up years after I first saw it.

Back in 1994 when Stargate was first released it was a surprise hit. Nobody could have envisioned that the film would spawn a number of popular TV shows and build further upon the mythologies mentioned. Yet here we are almost 20 years later and most people have at least heard of Stargate in some form or another.

Revisiting the movie is a strange, but rewarding, experience. I remember being underwhelmed when I first saw the film at the time of release. That's entirely my own fault. I was young and I saw a sci-fi/action movie that didn't have quite enough sci-fi spectacle and far from a satisfying amount of action. Watched again nowadays, however, I have to admire the focus on brains over brawn and the way in which the film comments on the downside of soldiers who blindly follow anyone giving the orders. A little knowledge goes a long way, as the film shows.

Directed by Roland Emmerich (who co-wrote the movie with Dean Devlin), this is an interesting precursor to the sci-fi and disaster movies that they would give audiences in their future careers. These guys have been responsible for a number of films that have thrown as much as possible onscreen (including Independence Day, Godzilla and The Day After Tomorrow) while also continuing to use heroes who save the day with their smarts as opposed to just muscle and weapons.

The story goes as follows - a bunch of smart folks and army folks are gathered around a large stone thingummybob, that becomes known as the Stargate (of course), and don't know how to make it work until the supersmart Dr. Daniel Jackson (James Spader) deciphers the symbology and sets things in motion. A team, led by Col O'Neil (Kurt Russell), is then sent through the Stargate, ending up on a faraway planet not unlike the ancient Egypt of Earth. They eventually find signs of life there, people who are kept ignorant and ready to do the bidding of the might Ra (Jaye Davidson). Perhaps an uprising is needed.

Stargate has everything in place to provide a perfect slice of entertainment. It's relatively smart (certainly in the core idea and the way things are tied together), the script gets everything over easily without feeling too clumsy, the cast and the characters are slightly more complex than usual for this type of fare and the SFX work holds up reasonably well. In fact, the overall design of the movie is excellent.

Spader is an excellent lead here, his character is slightly eccentric, believable in his intelligence and more full of awe at the sights around him than fear. Kurt Russell, seen at the start of the movie in an unkempt and suicidal state, is superb as the main soldier given his mission for a very specific reason. Then we have the androgynous Jaye Davidson giving another superb turn as Ra. The supporting cast includes Alexis Cruz, John Diehl, Mili Avital, Djimon Hounsou (billed as just Djimon), Erick Avari and Viveca Lindfors with every person doing what's required of them. You may not know their names but their characters are made real for the duration of the film and that's what counts.

The music by David Arnold fits nicely with the visuals and nothing here lets the movie down. I do think that many aspects could have been improved slightly - some better editing/pacing with one or two more action beats would have been nice, for example - but Stargate remains a very enjoyable and interesting film for sci-fi fans. 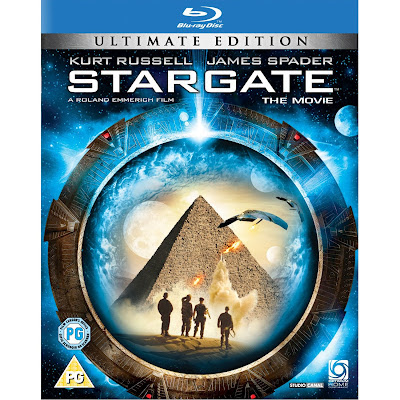