Another comedy written (with a helping hand from Etan Cohen) and directed by Mike Judge, Idiocracy is another out and out winner that once again shows how Judge seems to easily and unnervingly get to the heart of what elements in our society are so soul-sapping and painful that laughing AT them is the only way to stay sane.

This time around he's looking at the dumbing down of our culture and the whole world. In fact, the downward spiral of the world's IQ is put forward with horribly believable rationale and Idiocracy scores major points by mixing the absurd and hilarious with the prescient and scarily believable.

Luke Wilson stars as Joe Bauers, a completely "average Joe". He's in the military, coasting along, and happy with his lot in life. Everything changes when he's chosen for an experiment that will see him frozen in hibernation for some time and then reanimated. His fellow test subject is Rita (Maya Rudolph), a prostitute, and the two are nervous as the hibernation tanks close around them. 500 years later, after being forgotten about and left under rubbish and rubble, a freak accident releases the sleeping duo and they wander around to find themselves on a planet that can barely spell IQ. Joe is now the smartest man on Earth but that doesn't mean that he'll avoid getting himself in trouble.

Luke Wilson and Maya Rudolph are great fun in the lead roles while Dax Shepard, Terry Crews, Sara Rue, Stephen Root and Thomas Haden Church are among the cast members having a ball acting dumber than a bag of hammers.

The script is very funny, very funny indeed - mixing the superdumb with the subversive and clever - and great scene follows great scene. However, the main premise keeps the movie down ever so slightly. Call me a naive optimist but I like to think that the human race wouldn't become quite THAT stupid, even if the evidence seems to pile up every day to try and prove me wrong. The movie is a farce, albeit a superb farce full of numerous, individual, laugh out loud moments.

Mike Judge is one of the best comedy directors in modern cinema. He's smart, very observant and, most importantly (of course), damn funny. If you haven't found that out for yourself yet then I urge you to check out any of his movies as soon as possible. 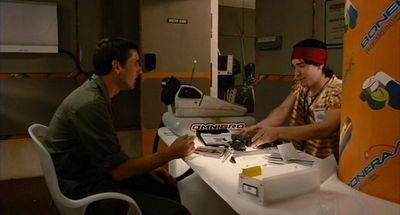