The worldwide web brings people closer than ever and has really changed many lives, there's just no denying it. I remember many years ago trying to write a number of movie reviews with nothing more than a pen, some paper and a huge Halliwell's Film Guide for reference. If the internet hadn't been invented I may still be doing that, I just loved films and loved writing about them. But the internet HAS been invented and it's allowed everyone to have their say, for better or worse, on whatever they like. The phrase "everyone's a critic" has never been more appropriate.

The internet has also allowed me to befriend a number of people I would otherwise have perhaps not know of. Aaron Christensen, who takes the lead role in Tape is a great actor, a fantastic movie critic and an all round nice guy. It's quite sickening, to be honest. He's like the human equivalent of a cute puppy and I'd hate him if it wasn't for the fact that he's so bloody good at everything that he even managed to bring together a number of IMDb Horror Boarders, including myself, to write essays that would be put together to form Dr. A. C's Horror 101 (published by Aaron at his own expense and pimped around America . . . . . by Aaron). It was a beautiful moment, I still own my copy and show it off to friends with pride. I also met Jason Coffman through movie-related chat with Aaron and that's another friend added to the list. Why am I telling you all of this? Well, Jason created Tape, starring Aaron, and has been promoting it for a while now over in America. Of course, as soon as I heard about it I was keen to see it. I reminded Jason of this the other day and was sent the link required along with the kind message that if I wanted to leave it alone because of knowing those involved then that was fine. This, I admit, made me pause and think for a moment. Would I have a conflict of interests here? What if I didn't like the film and had to put those criticisms here, in harsh black and white, potentially damaging a blossoming friendship?

Well, when it comes to movies we all have our own biased way of viewing things. That's unavoidable, in my opinion, so a conflict of interests is just the same - it becomes a factor in the review that can be taken into account as long as people are aware of it. I just made you aware of it.

As for the chance that I would dislike the film and upset Jason and Aaron and the other people who worked on the film (some of them I know and some of them I don't) well . . . . . . . . . that's just a risk that crops up more and more now with the great number and variety of people I am always befriending due to an enduring love of the movies. I don't WANT to be saying anything negative about work done by friends but if I think I have valid criticisms then I'll just suck it up, put on my big boy pants and write honestly. And hope they don't want to string me up for it.

Anyway, after that long and rambling preface, let's get to the short film itself. Tape is about a man (played by Aaron Christensen) who engages the unique services of one Mr. Lake. Mr. Lake will do your dirty work for you but there's a catch - you must then keep the tape that he delivers to you for the rest of your life. Whether you actually watch the footage or leave it in the box, hidden away somewhere, it stays there like some kind of recorded tell-tale heart.

Short films are always, I feel, harder to review than features. There are often surprises that you don't want to spoil and even sketching out the plot may be enough to spoil the experience for others. That's just one of the reasons that I don't often review short films. The other main reason is that I always have enough features to be working through. But that's not to say that I am dismissive or ignorant of short films. I love many of them and they're often fantastic stepping stones for directors who go on to bigger and better things after creating on e or two little gems.

Is Tape a good short film? I'd have to say that it is. I'd say that even if I didn't know Jason and Aaron and a few of the others involved I would still have enjoyed the movie. It has a nice, off-kilter, vibe to it and things develop in a tense and interesting manner. It helps that Aaron is, indeed, a very good actor and great in the central role (damn him, one day I will find a flaw . . . . . . . . one day).

Is it a great short film. Oh, it's so close. This is when I have to weigh up everything that I already mentioned above, that conflict of interest and those friendships. Yet I think that any viewer watching Tape would feel the same way. It makes you wish it was on for longer, it prompts you to consider how the premise could be expanded into a feature, it entertains and also makes you think. It might not quite reach greatness but it tries damn hard and I know that those involved all put blood, sweat and tears into the thing so I'm more than happy to recommend it as a very good experience.

There are, as you would expect, some slight failings (despite Jason and co. doing their best with the limited budget there's only so far you can go with restricted funds - this is never going to look like The Dark Knight Rises, of course) but nothing can bring the film down too far, thanks to a central concept that proves so enjoyable that it would take a bunch of idiots to really mess things up. And, as I've known for some time, these guys are certainly not a bunch of idiots. 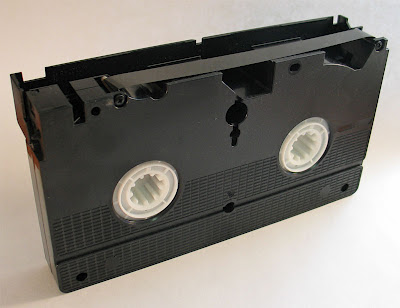