Before I begin this review I'd just like to point anyone who counts themselves a fan of Amicus movies toward the reviews that will be appearing on Flickfeast over the next few days. Yes, it's been a feast of Doug McClure films. Oh, and I am also hoping to put together an interview with director Kevin Connor so keep your eyes peeled.

But on with this wild, watery tale. The core of the movie is simple enough - a bunch of people are out at sea looking for some stuff and they come across one or two big beasties in the water before discovering the mythical area of Atlantis itself.

Directed by Kevin Connor (who did more than his fair share of these movies) and written by Brian Hayles, if you're already suspecting that this movie is a mix of cheesy moments, clunky dialogue and at least one big, rubber octopus then you'd be absolutely right.

But there's more to it than just that. The backstory to the people of Atlantis and what they're doing and also planning to do in the future is a good one while a story strand about a golden idol causing mutiny on the ship adds a little bit of tension.

Doug McClure does just fine in the lead role but cinema fans will have more fun recognising the supporting players. Peter Gilmore is still best known to many for his roles in the "Carry On" films but he's the driven and slightly deceitful Charles Aitken here, Shane Rimmer is good as Captain Daniels, Lea Brodie is lovely as Delphine and a young (-ish) John Ratzenberger does well. There's even a small role for Cyd Charisse.

The effects don't hold up too well nowadays, and they didn't seem all that great when the movie was first released (this film came out AFTER Star Wars?), and there are a number of scenes that threaten to put viewers to sleep but, overall, there's still a mix of genuine charm and a warm essence of nostalgia that makes this, and any other Amicus movie, something I can always rewatch if I catch it on TV during a dull afternoon.

Warlords Of Atlantis is out to buy on Monday 30th July. 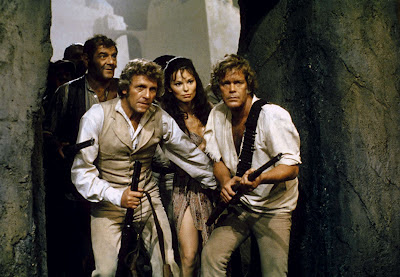