If you're going to do a remake then this is the way to go about it. For starters, the original movie wasn't exactly a perfect film and it wasn't exactly universally loved. Getting some bright young things in front of the camera to be put in danger is a given but it's a plus when you get someone behind the camera like Mitchell Altieri and Phil Flores (AKA The Butcher Brothers). The two men have already done some good stuff in the horror genre so I lift my hopes slightly when I see them attached to a project.

Taking the screenplay by Danilo Bach as a loose template (there are easy points of reference for those who have seen the original movie but this is also different enough to feel like quite a different beast), The Butcher Brothers also engage the help of Mikey Wigart in crafting something that's slick and disappointingly bloodless and amusingly ludicrous.

A prank goes horribly wrong and those involved find themselves threatened some time later. That's all you need to know. Yes, it's a mix of I Know What You Did Last Summer and the original April Fool's Day and Valentine. I don't care what you think of me, I LIKED those movies. I didn't love them but I liked them. Despite strong disapproval from almost everyone I know I actually really like Valentine (just such a great mix of old school slasher style and post-90210 teen sheen) so there you have my position on such glossy fare, for what it's worth.

April Fool's Day has some fun moments, and the cast has a couple of decent starlets in the shape of Scout Taylor-Compton and Taylor Cole, but it's all just a bit too bland to be solidly entertaining. The fact that it comes from The Butcher Brothers makes the tame nature of the movie even more of a disappointment and it's not helped by the rest of the cast - Josh Henderson, Joe Egender, Jennifer Siebel Newsom, Samuel Child, etc - looking as if they have wandered in from the set of Cruel Intentions 5 or The Skulls 6 (both of which are sequels that I'm well aware don't exist . . . . . . . . . . . . . . . yet).

I wouldn't go out of my way to see this again, and I certainly wouldn't rush out to buy it, but if it was on I could manage to sit through some of it. And if I see it anywhere at a bargain price I may well just have to buy it to satisfy my DVD-buying addiction. 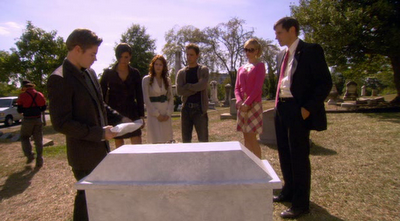