Charles Lamont returns to direct Abbott and Costello in this lesser outing that sees the duo meeting up with the legendary figure of horror. The plot is very slim, it's essentially summed up in the title, and the movie suffers by not actually having Bud and Lou onscreen for large durations of the runtime.

Bud and Lou are two police officers who get themselves in a bit of trouble when they're embarrassed by some protesting suffragettes. Perhaps they'll be able to get themselves back in the good books if they find and apprehend the monster responsible for terrorising London. That monster isn't always a monster, however, and so the duo don't realise how close they are to the villain when they meet the very civil Mr. Hyde (Boris Karloff).

It's weak, there's no denying that it's weak, but there are still a few good moments scattered throughout this A & C adventure. The script by Lee Loeb and John Grant may be light on laughs but there's at least one great set-piece that involves Lou being unwittingly transformed and the finale is a fun mix of thrills and amusing confusion.

The leading men are good when onscreen but, as mentioned above, that's really not often enough. Craig Stevens and Helen Westcott are acceptable enough in their supporting roles but things improve whenever Boris Karloff is onscreen, making this worth a watch if you're a fan of the horror icon (he gets more to work with here than he did in his last appearance alongside the boys).

Some fans of the duo had already written them off by this point but their last few movies still contain enough entertainment if you've been on the journey with A & C over the years and remained a fan of their style and routines. 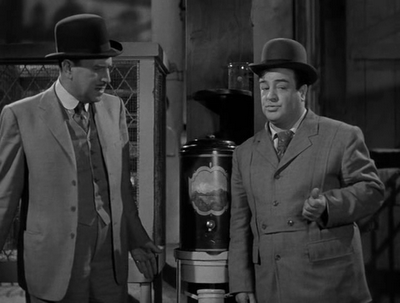