Just when you thought it was safe to go back on the beach, along comes Sand Sharks to remind you that no environment is safe from the dangers of horrible CGI. It's a familiar story to fans of much better movies, including Jaws and Piranha, as a small seaside town is about to become the setting for a big, moneyspinning, party until one or two people go and spoil everything by getting themselves munched. By sand sharks, no less. These creatures, in case you didn't realise, are just like sharks except they can move through the sand as if it was water.

Corin Nemec plays Jimmy Green, the man hoping to keep the party going even when the lives of others may still be in peril, while Eric Scott Woods is Sheriff John Stone and Brooke Hogan (who seems to have an affinity with strange sharks - she was also in the dire 2-Headed Shark Attack) is a pretty scientist type who may be able to help save the day. Vanessa Lee Evigan is also trying to help keep things safe while the wonderfully-named Edgar Allan Poe IV plays the mayor and Robert Pike Daniel gets to embarrass himself enormously with a terrible riff on Robert Shaw's classic Quint character.

Director Mark Atkins and writer Cameron Larson get a few things right in this cheap 'n' cheerful flick but there are too many things working against them to help raise the movie above the level of the godawful. It's fun in places and lacks any sense of shame whatsoever as it references the best shark film of them all and also includes one or two nods, for some reason, to Apocalypse Now. The cast do okay with the laughable lines that they're given - as well as those already mentioned there are a few scenes for the lovely Gina Holden and amusing performances from Hilary Cruz and Delpaneaux Wills.

And that's it. Nothing else can be praised. The special effects are only special if you've not seen any other movie in the last 30 years, the comedy misfires a lot more often than it works, the few scenes that require literally tens of extras hardly feature anyone remotely convincing and the central idea is mishandled - it's just not treated with enough seriousness or humour to make it work as either a decent creature feature or a fun, tongue-in-cheek, b-movie romp.

I almost feel bad for giving this movie such a low rating, almost. It was fun and it certainly tried often enough to rise above the low budget and cheesiness with a bit of wit but even though I was never bored while watching the film I had to concede that I was laughing AT it more than I was laughing WITH it. 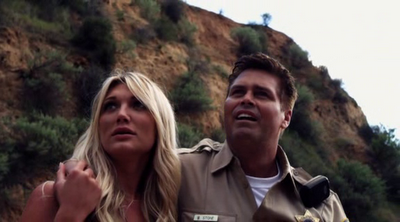