For anyone interested, my review of the first movie is on Flickfeast here.

Jack Deth (Tim Thomerson) returns to take on more Trancers in this hugely enjoyable sequel. Helen Hunt is also back, as Lena, and the film continues on from the events of the first movie, albeit six years later. Yes, Jack has been settled in the past now for six years and he's quite happy but he can sense something in the air, some vibe that somehow lets him know that Trancers are in the vicinity. What are Trancers, you might ask? Well, you have to watch the first movie to make sure that you're fully informed.

This sequel starts off a bit uncertainly but quickly hits its stride and then never pauses long enough for all of the nonsense to spoil the sense of fun. After an opening sequence that introduces the situation and characters and briefly tries to make the science stuff believable it's all about fun with the Deths and the people who end up having their lives saved by Jack.

With Charles Band directing once again, and Jackson Barr returning for the writing duties, there's certainly no big gap between the tone of this movie and the tone of the original. Deth is still a gruff guy, happier shooting a gun than trying to verbalise any emotions, and he's still a great central character.

Thomerson excels yet again in the lead role, and Hunt is also just as enjoyable as she was in the first movie. Art LaFleur and Telma Hopkins return, albeit briefly, and Biff Manard and Megan Ward have fun with their roles. Richard Lynch puts in a decent performance as the main villain while horror fans will love seeing supporting roles for Martine Beswick, Jeffrey Combs and the lovely Barbara Crampton.

There are a number of moments when the low budget becomes a bit obvious but that can't detract from the sheer sense of fun that fills every frame once Jack Deth sets his sights on baddies that he can happily blast away. Some additional emotional complication (Megan Ward's character is the future wife of Jack Deth, which displeases Helen Hunt, his wife in the present) is largely played for comedy value but adds a satisfying heart to all of the gunfights, gadgetry (the long-second watch returns) and paradoxes. If you liked the first movie then I see absolutely no reason why you wouldn't enjoy this sequel just as much. 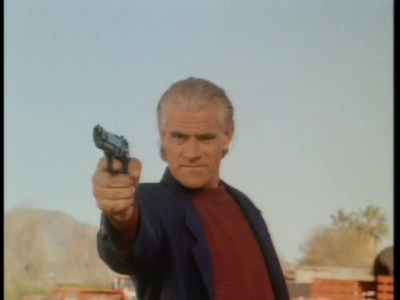