You may sneer and laugh at me for saying so but The Amityville Horror remains one of my favourite haunted house movies and I put it up alongside such classics as The Haunting and The Legend Of Hell House. It left an indelible impression upon me when I saw it in my youth and even though I am now older and wiser (and armed with the knowledge that a lot of the story is alleged to be completely fictional) I still can't watch the movie without being affected by the ominous presence of the house at the centre of the supernatural events. That haunting score by Lalo Schifrin doesn't help matters (I rank it alongside The Omen as one of the best horror movie scores of all time).

The story, for those of you somehow unaware of the most famous haunted house since Borley Rectory, is all about George (James Brolin) and Kathy Lutz (Margot Kidder), a married couple with three kids (two boys and one girl) and not too much in the way of disposable income. They move into the house in Amityville, aware of the history it has but dismissing the fact that the house itself is a bad place, and it's not long before things start going bump in the night, bump in the day and bump all over the place.

The Amityville Horror is, despite the fact that none of it actually happened, a fine movie. It takes a number of preposterous ideas and somehow makes them all believable, thanks to a mix of solid direction from Stuart Rosenberg and a great cast including Brolin in one of his best roles, Kidder being a bit less annoying than usual, Rod Steiger, Murray Hamilton and Don Stroud. Steiger is landed with the worst of the roles, a priest trying to help the Lutz family, but he has fun in the role and is always entertaining. The film also proves once again that what you don't see is always a lot scarier than any special effects that could have been thrown around onscreen (the one major visual fright is actually one of the lamest moments in the whole movie).

The book was written by Jay Anson, from the tale that he was told by George Lutz and his wife, and the screenplay by Sandor Stern takes the enjoyable and melodramatic raw material and keeps everything nicely paced en route to an unashamedly bombastic finale.

Yet, in many ways, The Amityville Horror isn't all that affected by the direction, the script or the acting. That music plays and the camera shows the "face" of the house and that's all it takes for the goosebumps to rise and the atmosphere to start taking hold. You might try to say that the house is actually an icon of horror. Or maybe I'd be alone with that opinion. 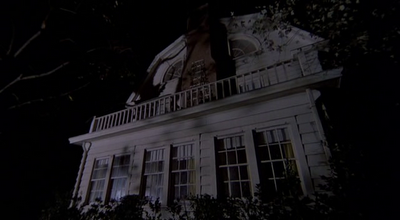