Lost In Alaska was another one of the many Abbott & Costello titles that I'd never heard of before deciding to explore as much of their filmography as I could get my hands on. I didn't expect much from it but, live and learn, it turned out to be a very enjoyable comedy with some great one-liners and at least one memorable routine (involving the duo sleeping in two hour shifts to keep a watch over a suicidal man - something that Bud manages to manipulate in his favour by winding forward the clock).

Our two leads play two volunteer firemen who make their lives more complicated when they save the life of heartbroken Nugget Joe McDermott (Tom Ewell). Joe is a gold prospector who got lucky with his prospecting but unlucky with his love life (he was rejected by Rosette, played by Mitzi Green). When his death is wrongly reported, Bud and Lou are wrongly wanted for murder and so they go with Joe when he returns to his hometown. Unfortunately, having changed his will to let people benefit from his newfound riches, Joe is wanted dead by a lot of greedy people (including Jake Stillman, played by Bruce Cabot) while Bud and Lou have to keep him alive to prove their innocence.

Directed by Jean Yarbrough, and written by Martin Ragaway and Leonard Stern, Lost In Alaska is a surprisingly top notch comedy from start to finish. Even the central contrivance that puts the leads in big trouble feels better than usual, a bit less forced despite being no less implausible.

The cast all do a great job. Mitzi Green plays a character who seems to change her mind from one scene to the next but she also shows that she's no pushover and there's a decent song from her, serving as a memorable introduction. Bruce Cabot is a decent baddie and Tom Ewell is very good as the unhappy Joe. Bud and Lou do their thing and do it well.

The finale is a bit of a disappointment but that shouldn't be enough to detract from all the fun of the first hour or so. There are some A & C movies that I'd easily watch again and some that I am just happy to have seen the once. This is one of the former. 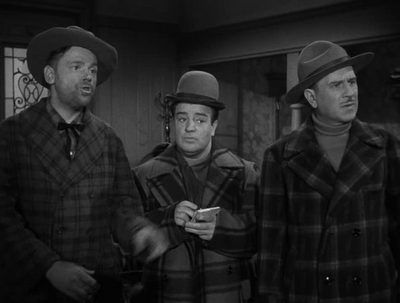