Jack Deth returns and he's after Trancers once again. If you don't know the backstory by now then I encourage you to check out the first two movies and start enjoying one of the most enjoyable and enjoyably ridiculous b-movie franchises that I've seen in many years. Three films in and there's no major drop in quality. I'm actually kicking myself for not listening to my many friends who advised me to watch this series sooner but now I finally get to write up reviews for them and recommend them to one and all.

For this third adventure, Jack Deth (Tim Thomerson) is once again being moved around time to try and head off the threat of a Trancer uprising. Trancers are people who can enter a heightened state when called upon, it makes them stronger and deadlier but also takes away their humanity. They're basically zombie soldier types. The only thing worse than a bunch of zombie soldier types is a bunch of zombie types being led and strengthened by an ambitious Colonel (Andrew Robinson). Yep, it doesn't look like poor Jack is getting to take it easy yet and there's no end to the time-travelling part of his job either.

C. Courtney Joyner takes over the writing and directing duties this time around but a lot of other familiar faces return to stick with a fun franchise. Thomerson is, of course, the key element in the lead role but it's good to see him supported once more by Helen Hunt (in a much smaller capacity), Megan Ward and Dawn Ann Billings. Melanie Smith doesn't do badly in her role (a soldier trying to expose the Trancer program), Ed Beechner is just fine as Lt. Ryan and Andrew Robinson is as good as ever in the role of Col. Daddy Muthuh. There's a suspicion that his character was given such a strange name just to allow for one line - "come to Daddy" - that references Hellraiser but maybe that's just me being overly suspicious.

There are a number of decent one-liners peppered throughout the script, the special effects range from the okay to the charmingly cheap and there's rarely a dull moment. I was seriously considering just rating this one on a par with the two preceding movies but it suffers slightly from a further build up of paradoxes and illogical moments and the fact that each instalment stretches the initial premise thinner and thinner. Despite the faults, all is forgiven when the fun begins and you get to see Deth warmed up. 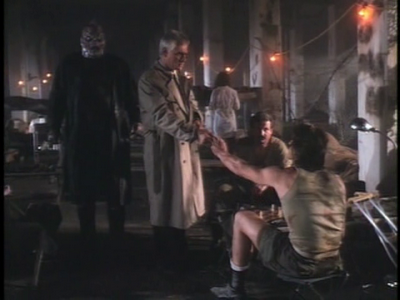