The story is all about Jennifer (Nikki Deloach) being given a house by her boyfriend (Evan, played by Stephen Colletti). It's a present for her birthday, he managed to get the property and 40 acres of ground and everything inside the house for $10,000, and the aim is to put enough work in to renovate the property and then sell it for a tidy sum. Because that makes the most sense. As opposed to other ways to use the $10,000. It's not as if Jennifer and Evan are a bit of a shaky couple who may not stay together further down the line. Oh, hold on, yes they are. That's made clear during one of their conversations in the first 15 minutes of the movie. Yes, things start at that level of unbelievability and get worse from there. A bunch of dull characters join the lead couple, a couple of familiar faces show up for cameo roles (mainly Treat Williams in a very small role and the great Michael Berryman) and someone goes out of their way to mention quite early on that there is no phone reception in the area.

Director Griff Furst, who also wrote the screenplay with Eric Miller (and Miller was helped in an earlier stage of the writing by Jake Kennedy - did this rubbish really need three writers?), doesn't seem to be trying for most of the runtime. Things are only ever livened up by the lowest common denominators - gore and gratuitous nudity - and even then the film struggles to hold your attention.

The cast try but are hampered by the material that they're working with. It's just too ridiculous and at times bordering on parody. Nikki Deloach is a decent leading actress until the final act, when things are stretched way beyond breaking point, and Anabella Casanova and Mariah Bonner are both pleasingly attractive and not allergic to some fleeting moments of being nekkid. Stephen Colletti, Ross Britz and A. J. Allegra are disposable males, overshadowed by the likes of Terry Kiser and the more famous names already mentioned above (Berryman, in particular).

If it had at least tried to do something with conviction then Mask Maker could have been a lot more fun. Instead, it fails to recreate the slasher thrills of the video nasty era (unlike Hatchet which, while I didn't love it, gets things just right) and it doesn't have the intelligence or humour to invest the stale material with something that could transform it into more than a poor pastiche of 101 better movies. Jonathan Breck is wasted as the main villain and the moment near the end of the movie that lifts a trick directly from Friday The 13th Part 2 should be enough to make you laughingly dismiss the whole thing, if you still had any hope left that there would be some redemption. 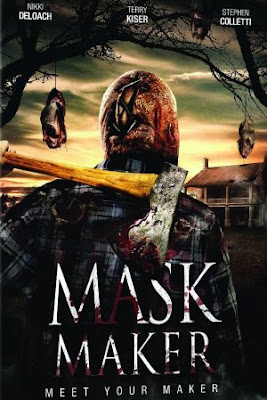