Written and directed by Mike Judge, Office Space resonates with a hell of a lot of people just as much now as it did when it was first released. The fact that the film wasn't given much, if any, support and advertising when it was released perhaps explains why those who love the film are so loyal to it. It's a cult hit but it's a cult hit with a lot of appeal to anyone who has been stuck in an office job at some point in their lives. It's a movie that you can watch nowadays and share with others, an experience full of familiarity and wish-fulfilment that makes for perfect viewing when you need cheering up after a bad day at work.

Ron Livingston plays the central character, Peter Gibbons, one of the hundreds of thousands of people who seem to spend their working days trying to hold on to whatever is left of their sanity from the moment they wake up to the moment they leave the office. He stares at the cubicle walls around him and spends a lot of his day just zoning out. That all changes, however, when he takes part in a unique hypnotherapy session that leaves him completely calm and not caring one bit about his job. This could get him fired, of course, but actually ends up making him look better to the two consultants who are checking out the company and "streamlining" some departments.

It's a bit rough around the edges, and not quite as sharp as it could be, but Office Space well and truly deserves the reputation that it has amongst people who have been praising it for years. The central characters are all superb but the biggest laughs come from the supporting cast of downtrodden workers (especially Milton, played by Stephen Root - a pretty perfect physical interpretation of the animated character*).

Ron Livingston is ably supported by David Herman and Ajay Naidu, both portraying fellow sufferers, and there's yet another wonderful turn from the always wonderful Richard Riehle. Gary Cole is hilarious as the office boss while John C. McGinley and Paul Wilson prompt more laughs as the two consultants impressed by Peter's attitude. Then there's Jennifer Aniston, giving a bright and breezy performance as Joanna, a woman stuck in a different kind of workday hell at an eatery named Chotchkie's.

It's a shame that a subplot about the workers trying to make themselves a small, dishonest profit feels shoehorned in and not that well thought out but there are enough brilliant scenes (many of them involving a frustrating printer) to raise the movie well above average and make the whole thing worth repeated viewings.

*For those who don't know, Mike Judge made the film based on his own animated works, "Milton", that proved to be very popular on Saturday Night Live. 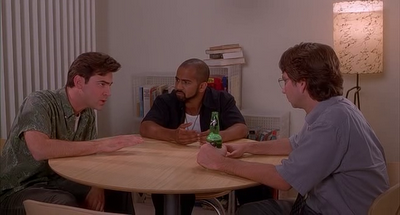