It's most definitely not the worst movie that I've ever seen but Jack Brooks: Monster Slayer is a pretty weak horror comedy that doesn't have enough good horror in the mix and also forgets to include enough comedy. There are some good effects and gore gags on display but not enough to make up for the insubstantial content and unappealing lead character.

Jack Brooks (played by Trevor Matthews) has a problem with his anger. A big problem. He just can't chill out and let things pass him by. There's a chance that it all stems from a childhood incident in which he didn't react while his loved ones were attacked, perhaps ever since that fateful moment he has been overreacting to compensate for his inactivity. Will he be able to step up to the mark when Professor Crowley (Robert Englund) finds himself turning more than a little bit monstrous?

There's definitely potential here, this is a film that a number of other people have enjoyed much more than I did, but it's just never realised because of the biggest hurdle - that lead character. Trevor Matthews does okay in the role but it's just an angry man onscreen being pretty stubborn most of the time. Kinda like any number of Adam Sandler characters but with a lack of anything remotely funny. Robert Englund does a bit better, and at least seems to be having fun, and the supporting cast features a number of people trying hard with weak material.

Writer-director Jon Knautz is the man to blame. He's had the seed of a great idea but then absolutely failed to make anything great from it. Poor Trevor Matthews is an easy target, especially when you consider what someone like Bruce Campbell or Bill Paxton could have done with the role (and if you've seen and enjoyed the movie just take a moment to consider those casting choices and then tell me that you can't imagine the whole thing being even better), but he's let down by Knautz just not getting the tone or balance right. The movie doesn't know whether to be a dark comedy, a light horror, a homage to the latex monsters and practical FX of the 1980s or an enjoyably 'rough 'n' ready' low-budget romp using every trick possible to hide the limitations. It tries to be all of these things, which is admirable, but ends up being none of them. 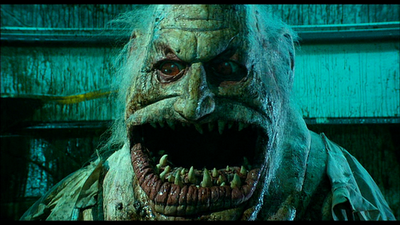