Cast your mind back, if you can, to the late 1980s. Michael Jackson, as yet untainted by any serious allegations, was massive. I really don't think there was anyone more famous at that time. He was certainly the biggest pop star on the planet, and arguably the most famous person in the world. His appearance had changed considerably, he had a pet chimp named Bubbles, there were rumours of him sleeping in an oxygen tank, and his eccentricity peaked, without any dark clouds gathered overhead (to our knowledge). I was allowed to pick my two main presents when I turned thirteen. I was becoming a teenager, almost an adult by then (to my mind). I picked up the Star Wars RPG manual (a superb tome that I absolutely loved reading through, even if I never did play the thing). And I HAD to get "Bad", on cassette, with a notebook and pencil packaged alongside it. That birthday is one of the clearest memories I have from my childhood years, and was one of my best birthdays ever.

There's an extended opening montage sequence, mashing up a number of Jackson hits (both with the Jackson Five and on his own), and then you get a slim plot. Michael has to spend some time avoiding some very excited fans, and he then becomes the guardian figure to three children (played by Sean Lennon, Kelley Parker, and Bradon Adams), allowing them to see some of his major dance sequences, a la "Smooth Criminal", and protecting them from the evils of drug-dealing Mr. Big (Joe Pesci), who wants to get every kid in the world hooked on his product.

Fascinating for a number of reasons, Moonwalker may be one of the most interesting vanity projects of all time, not only because of the music and visuals, but also because of the way it shows Jackson and his worldview. He wants to be cute and innocent one minute, he wants to be raunchy and sexy the next. He can make anything possible through the power of his dance moves. He likes to transform into different forms. And, most interesting of all, he views a large section of his fanbase as voracious animals who want to tear various strips off him, feeding their hunger while Jackson gives and gives all he can.

Is this a great movie when compared to other proper movies? No. Is it a fascinating and entertaining movie that celebrates someone at the peak of their powers? Yes. Unfortunately, it has an earnestness and lack of self-awareness that helps other star vehicles to be more enjoyable (yes, I'm going to mention Spice World again). Whether or not you can watch it now without considering the accusations made against its star, to simply view it as the time capsule it is and to enjoy the soundtrack, that's up to you. I can. But I also have the strength of that thirteenth birthday memory to boost my opinion of the whole thing. 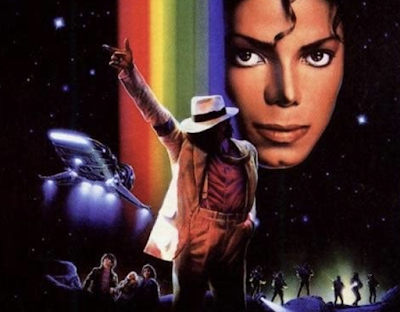