Shudder Saturday: The Dark And The Wicked (2020)

Written and directed by Bryan Bertino, this just shows that the dismal Mockingbird was a momentary blip from someone able to keep delivering the goods for horror genre fans. With this and his last film, The Monster, Bertino has provided two equally impressive, yet very different, horror movies.

The Dark And The Wicked has Louise (Marin Ireland) and her brother, Michael (Michael Abbott Jr.) returning to the family farm in Texas because of a very ill father. It's not long until their mother (Julie Oliver-Touchstone) harms herself and then dies, which leads to both Louise and Michael then starting to feel a strong presence taking over the area. It seems to want to wish harm open them, and upon anyone else who associates with them.

Although made with a decent amount of skill and polish, The Dark And The Wicked is not a film for those who just want some safe, mainstream, horror. It's not too bothered about making sure you get a full explanation for the unfolding events, for example, and there's a sense of puzzlement about the whole thing that simply adds to the horror. As has been said many times before, and by many writers better than myself, a strange killer without any obvious motivation is much scarier than a killer with a very specific agenda. This is, in many ways, an interesting companion piece to Bertino's first film, The Strangers, with the random acts of evil this time around perpetuated by a supernatural force, as opposed to a group of psychopathic strangers.

Ireland and Abbott Jr. are decent leads, and they’re also happy to not really be the focus of the film. Although Ireland gets a few more scenes that let her get her teeth into some more emotional content, this is a film about a pervasive evil. It’s almost a non-stop walk under a cloudy and portentous sky. Too Nowicki also does good work, and has a memorable encounter just as the third act starts to build towards the very end of everything, and Xander Berkeley is excellent as a priest who stops by to visit the farm. And it should be said that all of the visuals are accompanied by a superb, menacing score from Tom Schrader, providing music so good that it almost feels like the embodiment of the dark force at the heart of the movie.

Blending some occasional gore moments with some superb scares, The Dark And The Wicked is highly recommended. Bertino has a knack for keeping viewers on edge, even during scenes in which nothing much seems to be happening, and it's great to see his filmography expanding in a way that both highlights his strengths and also shows him happily moving between various sub-genres. Let's just hope he never decides to try another found footage horror and we're all good. 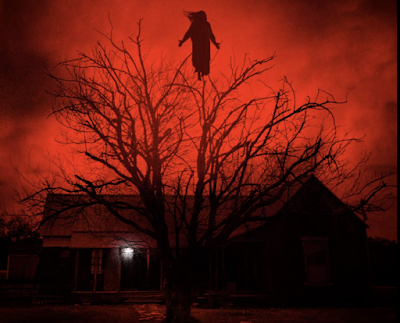