It had been discussed for some time now. An unofficial movie version of Five Nights At Freddy's with Nicolas Cage in a main role, battling killer animatronics. So when it finally appeared, coming along soon after the trailer had been put out there for Cage fans to enjoy, there was no way I was going to miss out.

Cage plays a silent man who ends up damaging his car while driving through a small town. The repair is going to cost a fair bit, but a couple of locals make him a deal. If he spends the night in the closed premises of Willy's Wonderland, cleaning it as best he can, then the work will be paid for. It's not long until the newly-hired cleaner realises that he's been put to work somewhere very dangerous. There are a number of animatronics that are far too lively, and out to kill. But they don't count on the Cage rage.

Willy's Wonderland is very silly, and not necessarily in the right ways. It's a very odd one to consider, tonally, with Nicolas Cage often seeming to be in a very different movie from anyone else who appears onscreen (and the cast includes Beth Grant, Emily Tosta, and a number of disposable supporting players). Both of those movies work, to a degree, but they never really gel together.

Writer G. O. Parsons has fun with his first feature script, largely keeping things tightly focused on the fun of the central premise, and director Kevin Lewis doesn't do a terrible job, although I suspect he's the one responsible for the film not working as well as it should. There's a lack of any singular style throughout, and even the levels of bloodshed and gore vary wildly from one set-piece to the next. The more amusing touches pop up often enough to remind you of how self-aware of the silliness everyone is (especially the timer that Cage uses to ensure he takes a break every couple of hours, but there's also a frankly glorious bit of gratuitous dancing from our lead as he relaxes with a bit of pinball), which makes it a bit more frustrating when things don't just keep getting wilder and wilder.

Cage is awesome, playing his role with just the right blend of cool, toughness, and awkwardness, and his fanbase should have a lot of fun with this. If you don't like him then nothing here will win you over. But also . . . you should just learn to like him. Grant is fine as the local Sheriff, very much aware of how dangerous Willy's Wonderland is, and Tosta is a very enjoyable second lead (named Liv), a young woman who leads a group of friends on a mission to destroy the animatronic-populated killing ground.

As much as it sounds like an overused cliché, this is the perfect movie to enjoy on a Saturday evening with your favoured selection of snacks and beverages. It's got Cage fighting silly villains, it's paced briskly enough, and it gets everything done in just under 90 minutes. Pair it up with The Banana Splits Movie and you have a great double-bill. 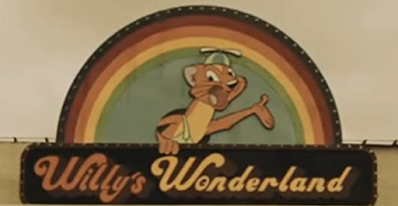