Having done his time protecting the President Of The United States, saving the world from terrorists, and even catching a dangerous submarine, Gerard Butler now gets to focus on trying to keep his onscreen family safe. I'm sure he has had a previous family-in-peril needing his strength and courage, but I can't think of any specific title just now, Because so many Gerard Butler movies just blur into one another. Which isn't that big a deal for me, mainly because I happen to like Butler anyway.

Butler plays John Garrity, a structural engineer. He's currently going through a difficult patch with his wife, Allison (Morena Baccarin), but the two of them try to put a brave face on things for the sake of their young son, Nathan (Roger Dale Floyd). They need to work even harder to keep brave faces when John receives an automated call as people group together to watch a passing comet. It turns out that the comet isn't just going to provide a pretty lightshow in the sky. It has bits falling into the Earth's atmosphere that will destroy entire cities. And one major chunk will bring about an Extinction Level Event. Heading to safety, the Garrity family finds numerous obstacles in their path, and the clock is ticking.

Written by Chris Sparling, a writer with a filmography that varies wildly in quality from the greatness of Buried to the sheer awfulness of ATM, Greenland is an entertaining disaster movie that wants to pretend it's a bit more grounded than most. It's really not, especially when you consider the coincidences required during almost every major plot beat, but it somehow manages to find a nice sweet spot between the more bombastic disaster movies and the likes of the more thoughtful, and disappointing, Deep Impact (note, don't hold me to that, as I am long overdue a revisit of Deep Impact, having not seen it since it first came out on VHS).

Director Ric Roman Waugh has an action thriller background (his previous film before this one being the Butler-starring Angel Has Fallen) and he capably delivers the goods here. You get some chases, you get a fight or two, and you also get some decent CGI causing big problems. The fact that this is a disaster film is almost secondary to the fact that it's a Gerard Butler film, for better or worse.

Butler is good in the lead role, one that doesn't really stretch him or take him out of his comfort zone, but it at least places him in a developing situation that feels a bit different from many of his other interchangeable movies. Baccarin is also good, even if she has to spend a lot of the movie hoping that she can stay alongside Butler while he offers protection and the possibility of escape. And then you have Floyd, a young actor who somehow manages to avoid being too annoying, even as his character makes things a lot harder than they otherwise could have been. Hope David, David Denman, Scott Glenn, and Holt McCallany are the other main names appearing here and there, all in small supporting roles as Butler, Baccarin, and Floyd attempt the seemingly impossible.

If you like disaster movies then there should be enough here to keep you entertained. If you like dramas with a bit of action dotted throughout then likewise. And if you like Gerard Butler movies then, well, you've probably seen this before spotting this review. 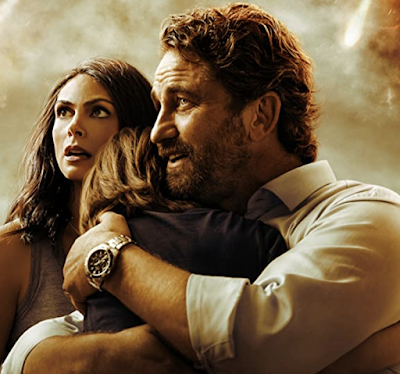