Although not from Japan, The Eye (2002) was one of many horror movies to be lumped in with the hits that were coming thick and fast in the J-horror boom at the start of the 21st century. It holds up as a superb horror movie, and it's a shame that the makers of it, the Pang brothers, didn't do anything else that came close to it.

The remake was probably inevitable, but that doesn't make it any easier to accept, especially with so many things wrong.

Jessica Alba stars as Sydney Wells, which is the first major error (more on that later). Sydney is a talented violinist, and she's blind. After undergoing a cornea transplant, Sidney has to get used to seeing the world around her, but it takes her a while to realise that she's not seeing the world the way that everyone else sees it. Much like a young Haley Joel Osment, she sees dead people. She sees so many of them, at times, that it's almost as if she's receiving an important message.

Okay, I may as well address my first complaint right here. I don't hate Jessica Alba, and I've enjoyed her in a number of roles, but she's not always the best choice for some of the lead roles that she's been given over the years, and I think her inclusion here just feels wrong. She's not convincing, whether playing the violin or reacting to the environment around her. Sadly, the rest of the cast don't do much better, which is more surprising when it comes to the likes of Alessandro Nivola (playing Dr. Paul Faulkner), Parker Posey (playing Sydney's sister, Helen), and Chloë Grace Moretz (playing a young hospital patient named Alicia).

The cast aren't helped by either the script, by Sebastian Gutierrez, or the direction, from David Moreau and Xavier Palud. None of these people manage to stick close to the atmosphere and style of the original, despite sometimes trying, which is a massive disappointment for those familiar with the 2002 film. Those seeing this story being told onscreen for the first time might be a bit easier to please, but even the most casual horror fan may start to feel that something is lacking. You get a number of jump scares, a load of messy CGI, and a third act that takes things in a direction that was not only done better the first time around, it was also done better in another fantastic 2002 horror movie (that I won't name, in order to avoid spoiling things for anyone).

It would be easy to go on and on about more of the things in this remake that irk me so much, and I do like a rant every now and again, but it's not really worth the time or energy. The Eye is simply a typical example of the laziest kind of remake. It's the kind of film we can all point to as an argument against remakes, despite the fact that there have been (thankfully) a number of modern remakes that have managed to get things very right. 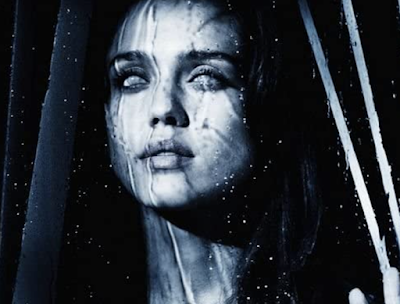