I'll admit it, sometimes I end up picking and choosing movies for this blog based on how well I think I can actually come up with a decent review for it. That can lead to me putting aside some lesser-known films (if there aren't enough details available then it can be hard to get the review exactly right), it can lead to me putting aside some very well-known films (because they've already had so many words written about them), and it can lead to me swithering on whether or not to review something like this, a film often listed among the all-time best, but one that features less main aspects for me to comment on. It's a silent film, and it mostly focuses on the lead actress.

Having said that, however, and as you may have noticed from these words already appearing here, sometimes I challenge myself. I want to write about a movie that deserves the effort it will take me to review it. The Passion Of Joan Of Arc is one such movie.

Directed by Carl Theodor Dreyer, who also co-wrote the movie with Joseph Delteil, a better title may have been The Trial Of Joan Of Arc, because that's what is depicted onscreen. Surrounded by a group of critical jurists, Jeanne d'Arc (Maria Falconetti) tries her hardest to stick by her claims that others deem heretical. Viewers should know the end result, but that doesn't make it any less effective as you try to watch one brave woman convince others that she deserves some mercy.

I can't take the time to comment on the supporting cast, although they all do a decent job in their roles. It's not that other people don't get much screentime, but they seem to merge into one mass of patronising males wanting to prove a woman wrong for speaking in a way, and showing a courage, that scares them. Falconetti, on the other hand, can definitely be given some time and space here. Her performance has sometimes been pointed to as one of the greatest of all time, and it's a hyperbolic claim that is actually hard to argue against. She's front and centre for the majority of the film, of course, and is always perfect at showing the mix of strength, vulnerability, honesty, fear, and so many other emotions that her character goes through on her way to the end of her journey.

It's hard not to give Dreyer almost equal credit for that performance, although (astonishingly) it is said that the entire master print was accidentally destroyed after the original cut of the film was complete, forcing the director to construct it from takes that he'd previously rejected. I think that just proves how consistent that performance from Falconetti was for every minute that the camera was pointing at her.

There's nothing else to say, not really. Will this convert film fans who are wary of diving further and further back into the realms of silent cinema? I'm not sure. Perhaps the staged nature of the material will keep them a step removed from being able to really enjoy it, but I like to think that many can look beyond that, helped immensely by the expressive turn from Falconetti. 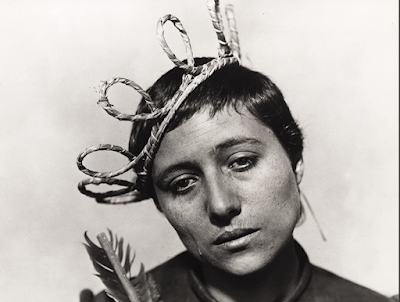