Following on from the events of the first film, after a couple of years have passed, Critters 2 is a fun little film that does what a good sequel should, trying to recapture the entertainment factor of the original movie while making things a bit bigger. It turns out that I'm in the minority here, but I think this is a rare sequel on a par with the film that preceded it. Get yourself the Critters and Tremors movie sets and you have some of the best, and most fun, creature features from the past few decades (get yourself Grabbers as well, for extra fun)

Brad (Scott Grimes) is returning to his home town to visit his Nana (Herta Ware). His arrival sets some tongues wagging, with many people thinking of him as the boy who cried "alien porcupine" a couple of years ago. It's a good job that Brad is back though, because some eggs are about to hatch, meaning that the town is about to have quite a Krite problem once again. That means it's time for the return of Ug (Terrence Mann), Charlie (Don Opper), and Lee (taking the shape of a glamour model for a lot of the runtime, played by Roxanne Kernohan). There's a young woman named Megan (Liane Curtis) also ready to believe Brad, and help out.

Directed by Mick Garris, who also co-wrote the screenplay with David Twohy, Critters 2 has lots to recommend it. You get the light sci-fi horror tone, you get more carnage this time around, and you get a brisk pace throughout. There's more great work from the Chiodo brothers, with more puppetry on display (including a wonderful "critterball"), and a whole lot of wonderful little details packed into every main critter-filled sequence. There's maybe not one single moment as unexpectedly funny as the "they have weapons" scene in the first film, but the sheer number of the visual gags will keep most viewers smiling, at the very least.

The cast are all good, and happy to play second fiddle to the puppets, and they work well together. Grimes remains the nominal lead (well, he shares that role with Opper), working well with Ware, Curtis, Mann, and everyone else around him. Curtis is a great female co-star, cute and plucky in the best b-movie character way. There are also small roles for Lin Shaye (again), Barry Corbin, and Eddie Deezen. Mann and Opper work well together, but neither are able to make as memorable an impression as Kernohan.

It's probably not a film that many of those involved will put high up on their C.V. (and Twohy certainly hasn't been kind when briefly mentioning it), but I really cannot see how anyone who enjoyed Critters can fail to enjoy Critters 2. There are flaws - Garris has never been one to overdo the visual style in his films - but the emphasis throughout remains focused on the sense of fun. 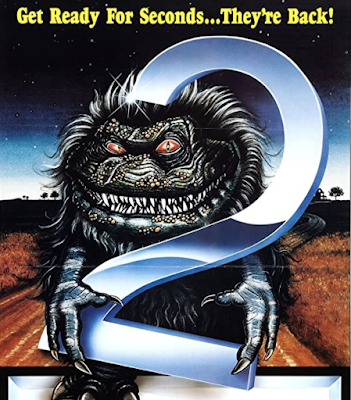