Josh (Eion Bailey) is a widower who has recently moved back to a small town to reconnect with some family. He's roped in to help with the odd jobs required for the Christmas festivities, which leads to him spending a lot of time on the phone with the best local baker, Molly (Alvina August). The two get on very well, which leads to a double whammy of optimistic good cheer for Molly when she also meets a young man she sees enjoying time in town with his young son, Charlie (Kesler Talbot). Unbeknownst to Molly, that man is also Josh. So he may well be the perfect package, but there are bound to be some obstacles on the road to a long-anticipated kiss under the mistletoe.

Another seasonal treat from director Terry Ingram (who has also helmed The Sweetest Christmas, among others), this is yet another average and predictable TV movie that is actually elevated quite a bit by the main cast members. It also helps that the script, by Mike Mariano, fleshing out the concept and story from Sharon Price John and Jill Bartlett, feels like a fun reworking of more enjoyable classics that film fans will be familiar with (mainly The Shop Around The Corner).

Everything is checked off the seasonal checklist here. Hot chocolates, cookies, a sweet message at the heart of everything, old-fashioned values being pushed forward as the most important things in life, kids acting more polite than any kids I've ever known in real life, a deceased loved one used to cast a large shadow over the lives of main characters (leading to one or two of the worst, and most manipulative, moments), and amused exasperation while untangling and testing a huge number of fairy lights.

As well as Talbot, there's another main child actor here in the shape of Nakai Takawira, playing Zoe, the niece of Molly. Although both child actors do well enough with their roles, Takawira shines a little bit brighter. In general, the females all fare better than the males here. Bailey is as bland and sweet as any of these male stars need to be, but August is far more charismatic and mesmerising, and there's also a fun supporting turn from Nadeen Lightbody, playing her sister. Fiona Vroom is Jessica, a woman who ends up trying to catch Josh for herself, and she pitches her performance at just the right level to feel slightly self-aware while also acting comedically eager to get a man.

Within the ever-growing collection of Christmas TV movies cut from the same red and green cloth, Deliver By Christmas actually stands out as being one of the better ones. That is all to do with August being such a great leading lady, and I hope she gets the chance to tackle some bigger and better roles in the near future.

For what you get here, in terms of performances and the fun plot, I rate this as an above average film. But, and I always feel the need to remind people of this occasionally, this is a rating based on comparison to the many other movies that play out almost exactly like this one. 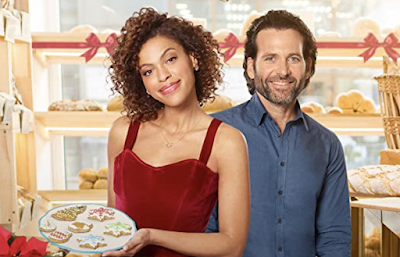