Prime Time: The Legend Of The Christmas Witch (2018)

When I discovered The Legend Of The Christmas Witch online I had to confirm two things. One, this doesn’t seem to be connected in any way to the recent storybook written by Aubrey Plaza. Two, and arguably more important to me, this is directed by Michele Soavi. Yes, the Michele Soavi best known to horror movie fans for films such as Stage Fright, The Church, The Sect, and, best of all, Dellamorte Dellamore.

The Christmas witch is a Santa/Krampus character who visits children on the night of January 6th. Good children get a treat, bad children get something less enjoyable. For the rest of the year, allowing her to live a relatively normal life, the witch looks much more pleasant and is actually a teacher, named Miss Paola (Paola Cortellesi). That leads to a number of Miss Paola’s pupils trying to rescue her when she is in Christmas witch mode. Her kidnapper is a man named Johnny (Stefano Fresi), someone who has held a grudge since he was accidentally overlooked by the witch many years ago.

A reminder of the weird and wonderful family movies that can be found if you look outwith the standard English language movies (with other titles of note being a French reworking of The Canterville Ghost and the absolutely delightful Zip and Zap movies), The Legend Of The Christmas Witch is a fun and lively holiday treat that manages to extend the slim premise to feature length without feeling overstretched.

The direction from Soavi has the light touch required for the material, working from the script by Nicola Guaglianone. The mix of child characters supply some extra drama in the first half (with one main character being bullied by some of the others), but we are never too far away from a bit of magic being shown. And it helps that the witch looks amusingly horrible, a proper stereotypical witch you wouldn’t imagine baking cookies and having treats for nice kids.

Cortellesi is a good lead, very pleasant and sweet in normal human form and, well, equally nice in witch form, which is juxtaposed with her witchy appearance. Fresi is an over the top villain, one of those characters who has more ego and resources than actual intelligence or power. The rest of the cast are okay, although few really stand out. That is a shame, there was a chance to make the individual youngsters more memorable, but that doesn’t happen. Francesco Mura is the victim of the bully, so he at least has a better story arc, and Fausto Maria Sciarappa is enjoyable as the seemingly blissfully ignorant boyfriend of Miss Paolo.

There’s a nice lore around the main character, based on the Italian legend, and an effective mix of twinkly Christmas lights and slightly darker atmosphere, making this an entertaining and unusual viewing option for the season. It isn’t great, remaining just a bit too slight and inconsequential once you get to the end, but it is good family fun (for those happy to read the subtitles, although a dubbed version is also available). 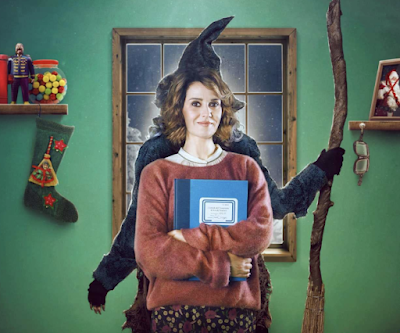