Thanks to a gradual easing open of the gates over the past year or so, Christmas movies can now be tailored to include main characters representing the LGBTQ+ community. Because, as all of us were already aware, a love story between two people can play out in very similar ways, no matter what the genders or sexual preferences of those involved. In fact, the pleasant surprise is that these movies already seem to play out a bit funnier, a bit smarter, and with more resonance than some of the many other movies that retread the well-worn, and enjoyable, snow-covered paths that we visit every year at this time.

After another disastrous episode in his love life, Peter (Michael Urie) convinces his best friend, Nick (Philemon Chambers), to join him as he visits his family for the Christmas holidays. The plan is to pretend that the two have finally committed to a relationship with one another. Nick is already well-known to the family, and already well-liked. Things change quickly, however, when it turns out that Peter's mother, Carole (Kathy Najimy), has set up a blind date between her son and a handsome new resident of their small town (James, played by Luke Macfarlane). Peter and James actually get along very well, but everyone else can see that the real love story to root for is one between Peter and Nick. Everyone can see it apart from Peter and Nick themselves.

Although it can be comforting to see Christmas movies made by people who have long spent their time working under that seasonal umbrella, there are many films all the better for being made by people less inclined to feel beholden to every trope and story beat. That's the case here, with neither director Michael Mayer nor writer Chad Hodge having broken in their snow shoes throughout their careers. Both know exactly what is needed, because viewers watch these movies with certain expectations, but they fill the journey to the predictable ending with plenty of fun little surprises (from moments of humour that are genuinely funny, a great selection of references, and a cameo appearance from a singer known best for expletive-laden covers of popular hit songs).

It helps a lot that this is cast well, but that's not to undermine the great work done by Mayer and Hodge, with the latter treating almost every cast member to at least one great moment. Urie is a likeable lead, playing up his haplessness at times, and doing well with the comedic moments he has while being blindsided and frustrated by how things unfold around him. Chambers is really sweet, the kind of unselfish and good-natured soul that needs to eventually be seen for the great love he could be by our central character. Macfarlane is handsome and nice, and I have enjoyed seeing a few Christmas movies this year that have allowed other characters to become potential obstacles to true love without being complete douchebags. Najimy is a very cool and accepting mom, matched by Barry Bostwick as Peter's father, the latter happy to just say outright what others are thinking during the first half of the movie. Jennifer Coolidge is the overly dramatic Aunt Sandy, the role is perfect for her and she even gets to deliver a meta-statement about how gay people seem to love her, and Melanie Leishman and Jennifer Robertson portray sisters with different levels of nerviness. Madison Brydges and Alexandra Beaton also get to stand out, playing two teenagers who more actively plot to start pushing Peter and Nick to see what they actually have between them.

P.S. Here is a huge list of every Christmas movie I have ever reviewed, either here or over at Flickfeast. 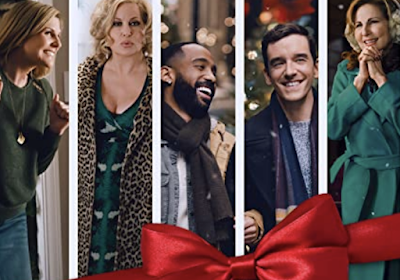