I have been a bit remiss this year when it comes to my usual helping of tinsel-adorned horror during the Christmas season, but Red Snow is one of the few newer titles that I was keen to see. It's worth noting that it doesn't feel very Christmassy though, despite being set during the festive period, and also, unsurprisingly, having a lot of snow onscreen.

Dennice Cisneros is Olivia, a woman who is busy trying to tweak and refine her first novel, a vampire tale. She's spending some time in an isolated cabin, focusing on her work, but the solitude doesn't seem to be helping her. Then a bat crashes against a window. Olivia takes the bat in, looking to help it recuperate, and is surprised to find that it has turned into a man named Luke (played by Nico Bellamy). Luke is obviously a vampire. After the initial fright of that realisation, Olivia and Luke start to get along. Olivia might be able to get information and feedback to help her with her novel, and Luke might be able to stay safe while he heals from an injury.

Written and directed by Sean Nichols Lynch, making his second full feature amongst his selection of shorts, Red Snow is a bit of fun that mixes the traditional with the unique, largely thanks to Olivia first being given a revision of vampire "facts" from Luke. It may not have any real tension throughout, and the moments of straightforward horror are few and far between, but you get enough blood splattered around to make the title accurate.

Cisneros is very good in the lead role, amusingly naive at times before she has to dig down into reserves of inner strength, and Bellamy is a cold and vicious vampire, which adds to the comedy when he has moments in which he is acting "tame" and harmless. Vernon Wells has an enjoyable cameo role, playing a vampire hunter named Julius King, and Laura Kennon is your typical vampire pack leader, named Jackie.

Although he doesn't quite do enough to cover up for his limitations, Lynch puts together a nice bit of entertainment that feels like it is made by someone who knows enough to mock some of the tropes without being outright disrespectful to them. The highlights of the film may be the conversations between Olivia and Luke, making up most of the first half, but the rest is certainly not dull, even if it never quite gets the horror aspect right to make this a successful comedy (if we HAVE to use genre labels, although nobody says that we must, then this is a comedy that just happens to have some vampire characters central to the action).

Cisneros, Bellamy, and Kennon give performances that mark them out as ones to watch, but the main one to keep your eyes peeled for is Lynch, who definitely writes and directs well enough to indicate that he's not far away from making a film in the next few years that could become a firm favourite for horror genre audiences.

Red Snow will be showing as a part of the Sohoho Horror Fest - Christmas 2021 (an online event that is on a pay what you can basis). 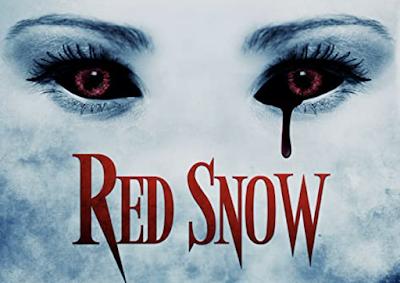