Nina Dobrev plays Natalie Bauer, a young woman who writes a popular column about her disastrous dating life. Her luck looks set to change when she connects online with the handsome Tag (Darren Barnet). She's so smitten that she decides it will be a good idea to travel all the way to his home town and surprise him for Christmas. That's when she finds out that she's been catfished by Josh Lin (Jimmy O. Yang). Josh obviously didn't expect Natalie to meet him, certainly not yet anyway, and he's very different from the way he has portrayed himself in his photos. Maybe the two can help each other through the holidays though. Having Natalie as his girlfriend would help Josh look a bit better in front of his family during the holidays, and he knows enough about the real Tag to help Natalie get close to him, and maybe have the date she was so looking forward to. As comedy hijinks ensue, Natalie and Josh try to maintain their facade while being reminded of why they got on so well throughout their many text conversations.

A Christmas rom-com that actually does a great job of delivering both the romance and the comedy, Love Hard (the title coming from a difference of opinion over great Christmas movies) is a genuinely enjoyable bit of holiday cheer that combines everything you expect from a Christmas movie with some smart updates to the formula. This might be due to the fact that writers Daniel Mackey and Rebecca Ewing have very few credits to their name, which can sometimes be a major negative. Knowing the various story beats they want to hit, however, allows them to satisfy viewers seeking comfort while also having fun with a number of commonplace modern Christmas conversations (including the movie discussion, and how some people nowadays view the lyrics of "Baby, It's Cold Outside").

Director Hernan Jimenez keeps everything moving along nicely. Although not exactly swimming in baubles and hot chocolate, he works well with a script that nicely slots together the traditional Christmas movie elements (carol singing, time spent/stuck with a large family, etc) and the comedy. It's a film that doesn't need to spend much time outside the small town that Natalie visits and Jimenez doesn't try to awkwardly expand anything unnecessarily.

Dobrev is a cute lead, whether she's being adored by her main co-star or falling over in standard rom-com slapstick fashion. Yang is great fun, from the introduction that reveals his lie to a third act that forces both central characters to be more honest with themselves. Barnet is playing someone who isn't actually very interesting, and isn't actually the catch that some might think he is, and he does a good job, wandering through proceedings with an amusing lack of self-awareness. There are plenty of other enjoyable performances from everyone in a supporting role, but the obvious highlights are Matty Finochio, playing the wryly amused boss of Dobrev's character, and Harry Shum Jr., playing a sibling so awful that you just know he would be best friends with the character played by Adam Scott in Step Brothers.

It doesn't ever quite soar, despite coming close, but Love Hard absolutely does what it sets out to do. It's cute, it's quite clever in places, and it throws one or two attempted curveballs on the way to a comfortably predictable ending. An extra set-piece or two, some better use of the soundtrack choices, and maybe one more supporting character throwing a spanner in the works, and this could have been truly great. It's still good though, sometimes very good, and I wouldn't be surprised if some viewers consider it a new seasonal favourite. 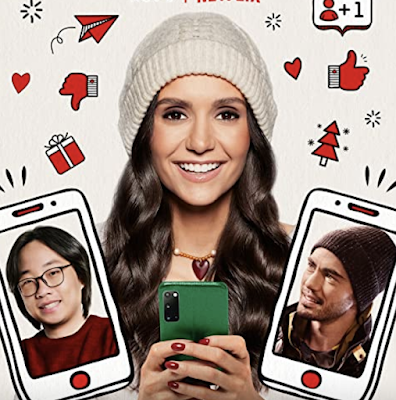