It’s a very familiar tale. As Christmas approaches, someone starts to wish that they had made some different decisions to take his life to a better place. But what would that perceived betterment cost?

James Denton plays Ethan Holt, married to Joyce (Teri Hatcher). They have two older teenage children and a decent life, but Ethan feels as if he has been stuck at a career plateau for quite a few years now. Granted a standard Christmas wish by a Santa figure (aka SANTA, played by John B. Lowe), Ethan gets the career trajectory he feels that he missed out on, but no longer has his content family life.

Director Jeff Beesley has been churning out movies like this for a couple of years now, before that having delivered a greater variety of TV shows and non-seasonal fare. Writers Mark Amato and Tracy Andreen have a bigger list of little crackers to look over, a number of them that I have already seen and reviewed, and they are very comfortable with the general beats that these movies should hit. Although this has a male central character going through a major life lesson, as opposed to a successful businesswoman, there’s a lot of comforting familiarity here. You have good Christmas feeling throughout, at least one montage, and that bit of magic the whole plot turns on.

Denton is a decidedly okay lead, a character defined by the changes around him and his quest to ensure that all’s well that ends well, but Hatcher is the more obvious star. She still has a great presence onscreen, and does a fine job without ever giving the impression that she is just coasting through the whole thing. Marilu Henner is a good big boss figure, someone with great success who remembers that profit doesn’t always have to ruin the lives of others, and Rod Wilson plays the kind of manager who wants results at any cost, which leads to Denton’s character wrestling with his conscience as he tries to plot his best career path onwards and upwards. Lowe makes for a good Santa figure, as wise as he is mischievous (aren’t they always?), and other supporting players do just fine in their various roles.

Managing to somehow paradoxically be a bit different from the many other TV Christmas movies made this year and yet exactly the same, A Kiss Before Christmas is another safe and dependable choice to let play out on your TV while you either prepare for Christmas Day or relax with some calorie-loaded treats and hot chocolate. 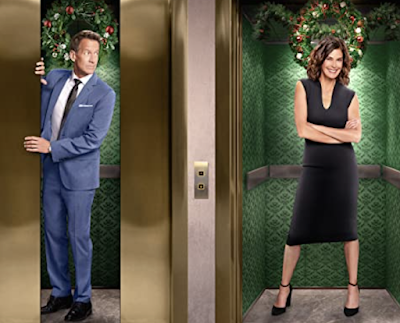