As is evidenced by the many posters you can view and by almost every Hallmark TV movie you can choose to view, Christmas movies are largely populated by smiling, white, heterosexual characters all just waiting to kiss the right person under the mistletoe. You do get exceptions, and some of those exceptions have opened the gates for some better movies, but straight, white people still seem to be the norm. I watch many of those movies, some would say that I watch more of them than anyone should, but I do try to widen my viewing options sometimes. When I remember.

This Christmas is a traditional Christmas movie that features a superb cast portraying members of an African American family, the Whitfields (headed up by a matriarch, Ma’Dere, played by Loretta Devine). Everyone has their various problems and/or secrets, but the ones who get more screentime are Lisa (Regina King), a woman married to a man who is taking her for granted, Quentin (Idris Elba), a man home for the holidays while he also tries to evade some bad people he owes money to, and Claude (Columbus Short), a young soldier who has a partner he is reluctant to introduce to the whole family. Then there’s Joseph aka Big Joe (Delroy Lindo), a man living with Ma’Dere while they pretend otherwise in front of some visiting relatives. There’s more going on, a young woman has a good time with a man who is also playing the role of a Santa Claus and one young man is hiding a great singing voice, but those characters I have just named, and their issues, are kept to the fore.

Written and directed by Preston A. Whitmore II, This Christmas is an easy film to enjoy, and a typically sweet-natured and soft-centred seasonal treat. There are scenes that add a bit of grit and/or tension, but they don’t play out long enough to be too jarring in amongst the more standard family scenes.

I will praise the cast in a moment, but it’s worth praising the soundtrack while I remember. A few tunes are well-used throughout, as well as a fantastic number that plays out over the first part of the end credits while the cast get to shake their stuff in turn. It’s a good way to ensure that any residue of sour taste is washed away, and people should be smiling once the screen turns to black.

Short is just fine in his role, but both King and Elba are strong favourites of mine, and both shine in their roles here. They help to elevate the material, basically showing some of the younger cast members how it’s done. Devine is suited to her role, and she plays a character who also needs to learn a lesson on the way to the big finale, and Lindo is . . . well, look, point me to a film on which Lindo isn’t fantastic and I will hold up a mirror in front of your face and point you to a liar. I hope that clarifies how I always feel about Lindo. Everyone else does sterling work, and me not mentioning them by name isn’t to dismiss their performance entirely. It’s just that most of those I just named are big favourites of mine.

This gives you everything you could want from this type of film, and it feels like everything has been put together with a bit more care, and less of a view towards simply delivering a package of Christmas sweetness. The characters grow as the film unfolds, and the satisfying results feel earned. Well, they certainly feel more earned than your usual Christmas movie endings. 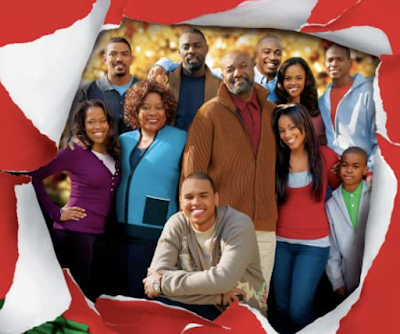