It can be difficult to move on after the death of a loved one. Emma Lockhart (Hayley Orrantia) struggles for the two years after the death of her mother, distracting herself from the pain by turning her focus towards helping her father, Jack (Dermot Mulroney). Things get tough when Emma finds out that her father is now dating Brandy Barnes (Janel Parrish). Brandy is about the same age as Emma, the two were even briefly friends in high school. This cannot stand, and Emma determines to make use of the Christmas holiday time to break up her father and his new love interest. Her friend, Charlyne (Emilie Modaff) doesn’t approve, but at least there’s a handsome barman (Josh, played by Michael Naizu) who doesn’t mind being used to help cause a bit of friction.

While it may not be the most Christmassy movie of the many Christmassy movies you could choose to watch, Christmas Is Cancelled is a very enjoyable comedy that should make most viewers chuckle a few times. And there are enough trees and decorations to remind you that it is definitely still a Christmas movie, albeit one that has some more colourful language than most.

The script, by Sara Endsley, is full of gems, hilariously creative insults and phrases, mostly interspersed throughout the first half of the movie. It also works well by somehow showing the central relationship between Jack and Brandy as something that could work, despite the two seeming very mismatched in so many ways (not just in age). Endsley has previously written some more traditional holiday fare, including the poor Melissa Joan Hart vehicle Holiday In Handcuffs, but this is a big step up from her previous work.

Director Prarthana Mohan has only one previous feature to her credit, as well as some shorts, but she knows exactly what to do here, framing many shots to emphasise rivalry, resentment, and, most of all, the ridiculousness of the “competition”.

Parrish is an excellent lead, easy to like and stay inside with even as her behaviour gets worse and worse. Parrish is just as good, especially while being allowed to show that she is more than just a potential bit of eye candy/midlife-crisis. Mulroney helps things along with a performance that shows him still maintaining a twinkle in his eye as he deals with lower back pains. While Naizu is portraying the hip and hot young man who also has a bit of depth to him, the script helps him by acknowledging and playing with those expectations, which allows him to make a better impression than he perhaps otherwise would. Last, but by no means least, Modaff is very funny as the friend who won’t hesitate to be brutally honest about how she sees things.

So you have a witty script, decent direction, and a fun ensemble cast. You also have a finish to everything that doesn’t feel cheap and made-to-order (the only real obvious indicator of the lack of any cinematic ambition is the lacklustre soundtrack). This is an easy winner if you’re after some laughs with an adornment of tinsel and baubles.

P.S. Here is a huge list of every Christmas movie I have ever reviewed, either here or over at Flickfeast. 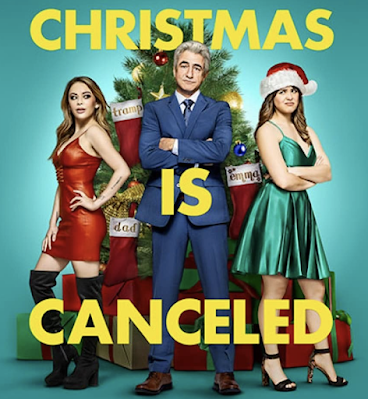