Mubi Monday: The Trouble With Being Born (2020)

This is my first time viewing a film from director Sandra Wollner, who also co-wrote the script with Roderick Warich. Despite the interesting mix of ideas, I don’t think I will rush to explore the rest of her filmography, for one main reason I will detail soon enough.

What we see here is a man (Dominik Warta) who seems to be living with his daughter (Elli, played in this guise by Lena Watson, which is a pseudonym to protect the identity of the young actress). Two things soon become clear. One, Elli is actually an android. Two, the relationship between the man and young girl goes far beyond the acceptable limits of any relationship between an adult and child. That is the starting point, and things happen that eventually lead Elli on a journey to another household, where she is reconfigured to portray a young boy named Emil.

Described as something akin to an antithesis to Pinocchio, and touching on themes covered by the likes of A. I. Artificial Intelligence and Black Mirror, as well as many others (the Yorgos Lanthimos movie, Alps, also comes to mind), The Trouble With Being Born ends up sitting in an uncanny valley of its own making. While no viewer would want things to be shown more explicitly, the lack of any real context for the behaviour of the central character leaves the whole thing feeling hollow, with the interesting commentary overshadowed by a seemingly desperate desire to shock.

Performances are generally good overall, with Watson a real highlight as the innocent robot trying to piece together data/memories to create the best persona for her/his owner. Everyone else does well, especially Ingrid Burkhard, playing the woman who is given the robot as Emil, but the focus stays on Watson and the complexity of having them taking the place of a missing loved one.

The script is minimalistic for most of the first half, allowing a number of scenes to play out in discomforting quiet, emphasising the intimacy on display, but Wollner compounds the problems on the page with direction that stubbornly refuses to move away from an impartial and impassive position. A lack of any movie-set moral compass raises many more questions than the film can hope to answer, and very few of those questions are ones that should be given any airtime.

Nicely shot, well acted by the main cast, and with a third act that is a lot more intriguing and satisfying than the first 2/3 of the film, The Trouble With Being Born is ultimately a misjudged attempt to use sci-fi trappings to explore some aspects of human nature that require a much more incisive approach. The lack of focus damages what could have been a film worthy of your time, and I am sure many people will regret watching this within the first 15-20 minutes. 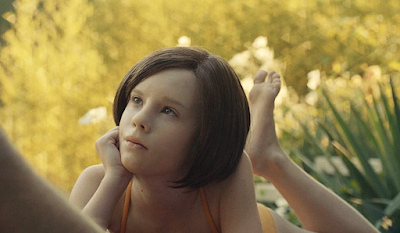