Eva LaRue and Dan Gauthier play Sara and Scott VanCamp, a married couple who have two children, Ally (Izabela Vidovic) and Will (Mason Cook). They also run a Christmas shop, and their busiest time of year is, inevitably, on the run up to Christmas. What they don't have is any actual Christmas spirit. They've become too focused on the business, with their hectic schedule stopping them from spending as much time with the children as they might like. Thankfully, the kids have good old Uncle Dave (John Brotherton) to make life a bit more fun sometimes. And they're about to get a new helper in the house in the shape of Christine (Summer Glau), an elf sent there by Santa (Steve Larkin).

Written by Abbey Cleland Lopez (her first script) and Bob Sáenz, Help For The Holidays is a film that seems to hit all of the marks required for this type of thing, yet feels strangely lacking. It's like biting into a chocolate that is meant to have a flavoured centre and finding it hollow. All of the parts are there - the adults needing to be reminded of the true meaning of Christmas, a twinkly-eyed Santa who has faith in things working out well in the end, some elf magic, kids making big eyes, etc - but there's no feeling of any progress being made until you get to a final sequence that feels unearned and rushed.

Director Bradford May has done a few of these movies, unsurprisingly, but his filmography shows that he did very different fare both before and after this. Perhaps he wasn't as knowledgeable as others who have worked their magic in this particular, tinsel-adorned, arena, or maybe he just incorrectly relied on the script and performances to carry things along pleasantly enough.

Let's start with Summer Glau, an actress I have enjoyed in a number of other roles. She certainly has the look of a potential elf here, helped by some pointy ears that can be magicked away when she is masquerading as a normal human, but her performance is pitched at just the wrong level of naivete and over-exuberance. Brotherton does much better at striking the right tone, although it's easier for him to stay in "fun uncle" mode for most of his scenes. LaRue and Gauthier try their best, but they are hampered by a script that has them doing very little until things change, for no good reason, in time for the end credits. Vidovic and Cook are pretty decent child actors, both delivering the right level of moodiness and wide-eyed innocence, depending on what the scene needs. Last, but not least, Larkin is quite a disappointing Santa. He isn’t a bad actor with the role, he just doesn’t have that perfect look.

Although it lacks a number of the perfect ingredients to make for just the right Christmassy confection, Help For The Holidays at least has a nice sprinkling of magic throughout many scenes and benefits from a central performance that, while overdone, is at least delivered with plenty of enthusiasm. 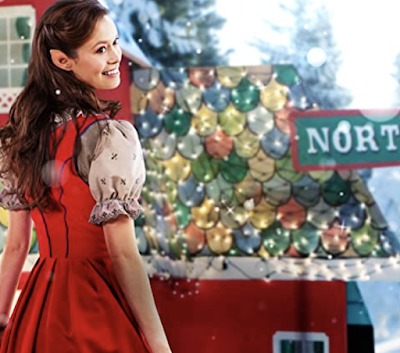