The idea of a children's entertainer with a dark personal life is fertile ground that has been explored in film before, but nowhere near as often as it could have been. So I'm always pleasantly surprised when another film utilising that premise comes along, and Kringle Time is one of those films.

Benny Elledge plays Jerry, the manager of a small TV channel who spends a lot of his time trying to manage the star of the schedule, Kringle The Snowman (aka Herb, played by Vernon Wells). Kringle is a symbol of goodness and joy, but Herb is a bit more of a problem. Things get a lot worse, however, when Herb dies on the show, leaving Jerry to figure out the best way to move forward. He wants to ensure that Kringle can carry on, it's only a man in a suit, after all, but that doesn't take into account the legacy of darkness that Herb has left behind.

Directed by Matthew Lucas, who also came up with the main story idea alongside writer Zan Gillies, Kringle Time is a film that doesn't quite know the best way to approach the material, which is a great shame because there's a lot here of interest. Whether deliberate or not, the revelations discovered after the death of a beloved entertainer feels particularly relevant when considering some of the big news stories of the last 5-10 years. Not only that, one or two characters here eventually have to face up to the fact that they were complicit in the behaviour that should have been shut down as soon as it began. This is a film that feels as if it could showcase the turning tide in the world of entertainment, throughout all sectors, in the wake of the #metoo movement, but it decides instead to keep returning to a much tighter focus on the character of Jerry, his journey culminating in some major life lessons.

Elledge is excellent in his lead role, and Wells is equally good as the scummy Herb. Jeff Wincott is a lot of fun as a Mayor always looking to secure the goodwill of voters, Alyssa Keegan makes a strong impression as the strong-willed Daphne, also looking after the interests of the station. There are some other decent performances from the supporting cast, but nobody stands out, largely overshadowed (quite rightly) by the presence of Elledge and Wells as Jerry/Kringle/Herb.

Lucas has made the film he wanted to make, I am sure. It's just a shame that the film he wanted to make went on a very different path from the film that could have been. The first half of Kringle Time promises so much, a whole new world that has accountability and reparations for those who have been victims of someone who didn't even think they were really doing anything wrong. But the second half forgets all of those things, unironically choosing to have us watch the pain and outbursts of a wronged white man instead. That's a real shame, because it's a well-made film that just suffers from losing focus and heading off in the wrong direction.

Kringle Time will be showing as a part of the Sohoho Horror Fest - Christmas 2021 (an online event that is on a pay what you can basis). 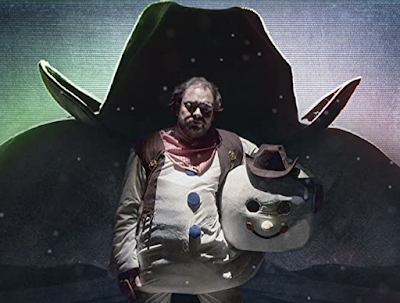