Steve Bedford (Bruce Campbell) and Mike Sullivan (Peter Gallagher) were once one of the biggest musical duos around, and "One December Night" was their biggest hit. But they eventually went their separate ways, breaking their relationship into smaller and smaller pieces with each little unresolvable issue. It's a surprise to everyone when they agree to a televised reunion show, but it turns out that Sullivan really needs the money. Does he need it enough to put up with his partner again though? Yes, but that won't stop him from potentially cancelling the whole show if he gets sick of everything, which is where his daughter (Quinn Allan, played by Eloise Mumford) and Bedford's son (Jason, played by Brett Dalton) come into the picture. They are hoping they can smooth things over enough for the show to go ahead, and that also involved getting the pair to agree to sing their biggest hit.

Written by Eric Brooks, One December Night is an enjoyable and easygoing Christmas TV movie that is elevated by the leads, but it’s a shame that the material wasn’t reworked to play to the strengths of what some might consider its most valuable asset, Bruce Campbell.

Director Clare Niederpruem keeps everything ticking along nicely, the generic music blends together to create the notion of a career with a few hits in it and the visuals are what you expect; snow, small town charm, and bland and appealing supporting characters.

Excelling in the moments that hint at his usual persona of cockiness and narcissism, Campbell is fun in his role, but is also allowed to settle into more straightforward drama in the third act. Fans may well want more from him though, and not without good reason (as letting him go even bigger could have provided an entertaining vein of comedy through something that feels more po-faced than it needs to be). Gallagher is a good choice alongside him, a decent actor who plays things with a more subtle approach. Mumford is cute and bubbly, as she has been in other movies for this season, and Dalton is fine, although the least of the four leads. The other person worth noting is Jasmine Forsberg, playing a lesser-known musical artist who may well get her big break supporting Bedford & Sullivan at their reunion show.

People after something typically full of the spirit of Christmas won’t be disappointed. This does the job. It’s just a shame that nobody decided to tap into the potential provided by the casting, which could have made this a genuinely amusing comedy drama. It almost succeeded anyway, especially when you see Campbell’s approach to fake guitar playing.

Serviceable. I just wish this one had reached for more. 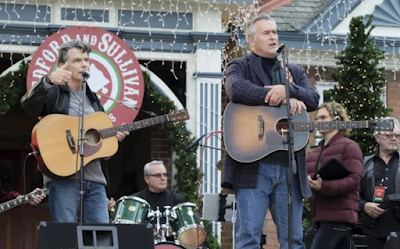