Written by Kari Drake and Duane Poole, Next Stop, Christmas is another Christmas TV movie that makes use of a time travel element. Which also means that it's another Christmas TV movie that makes use of Christopher Lloyd. The fact that it also features Lea Thompson in a main role gives it bonus points though, and creates some extra familiarity with one or two of the plot details (such as someone aiming to recreate a first date for their parents so that a loving relationship can be maintained).

Lyndsy Fonseca plays Angie Reynolds, a young woman who feels a tinge of regret one Christmas when she starts to think of what might have been. She is doing well in her medical career, but that is offset by her thought that she should have said yes when her boyfriend, Tyler Grant (Eric Freeman), proposed to her a decade ago. They are no longer in contact, although she sees his face anywhere because of his successful career as a sports commentator/presenter. Angie has also been saddened by the fact that her parents drifted apart and ended up separating. A big chance to change things is given to her, unbeknownst to her, when a magical train station “worker” (Christopher Lloyd) gives her a round trip ticket that takes her to that crucial holiday with the family . . . ten years previously. Can Angie accept her proposal now? Can she help her parents find their spark again? And will she reconnect with her best friend from childhood, Ben (Chandler Massey)?

While hitting a lot of the Christmas TV movie tropes, Next Stop, Christmas also manages to be genuinely entertaining, and occasionally properly amusing, throughout. It counts on viewers buying into the inexplicable magic of the main premise, but viewers have to do that with every Christmas movie, to some degree, so that shouldn’t be a problem.

The script hits all of the expected beats, but you also get some enjoyable pop culture references, and things are helped by the fact that Angie outright explains her situation to Ben about a third of the way into the movie, providing proof that eventually convinced him that she is telling the truth. The fact that our lead has to fix a situation in order to make a faded train ticket become fully visible is also a fun nod to the casting of Lloyd and Thompson (every time it was shown, I couldn’t help but thinking of that family photo in Back To The Future).

Director Dustin Rikert isn’t new to this kind of stuff, although his filmography has a varied mix to it, and he does well with the material, simply allowing the lead characters to have much more fun when not attached to any of the main supporting characters.

Fonseca is a very likeable lead, one of the best I can think of when it comes to these movies, and she works well with an equally-likeable Massey. Freeman needs that big flaw that allows our lead to see where her heart may truly lie, but he’s not stuck with being a massive jerk. He’s not actually that bad, the main problem being his constant attachment to his phone as he is offered a major career opportunity. Lloyd is a fun presence, appearing every so often looking not entirely unlike Tom Hanks in The Polar Express, and the film is boosted by his role being more than just a point-scoring cameo. Thompson is also very much welcome, even if she is playing a woman who seems quite unhappy for most of the movie, and the rest of the cast does just fine, although the only other standout is Erika Slezak as Aunt Myrt (a woman famous for her wonderful Christmas parties).

Once again, I must remind people that Christmas TV movies are films I compare to a standard set by other Christmas TV movies. By that criteria, this is a great success. It’s still as predictable as you expect, but the journey of discovery is a lot more entertaining than the same kind of journey shown in so many other movies made to fill the schedules at this time of year. 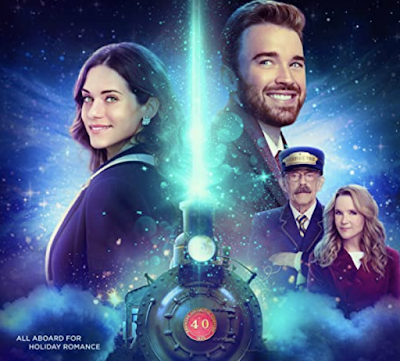