Clownhouse, it's a movie that's impossible to review without discussing the events that occurred behind the scenes. Writer-director Victor Salva was convicted of sexual misconduct with one of the young stars of the movie and spent a year in prison. This penchant for young boys has made viewing many of his films a strange, disturbing experience (once you know about the man behind the movies you can't watch the likes of Powder and Jeepers Creepers 2 in the same light), but it makes viewing Clownhouse - the scene of the crime, as it were - a particularly skin-crawling experience.

Having said that, everyone who knows me should know that I strive to view and review films outwith other factors that may distort opinion. I wasn't going to write the paragraph above, but then assumed that people would think I had viewed the film without knowing about the horrible background to it. Now that we've mentioned it, let's move on to just reviewing the movie because that's about the only thing I'm good for. Sometimes.

Nathan Forrest Winters, Brian McHugh and a young Sam Rockwell (making his film debut) are three young brothers who go to the circus and then return home. Unfortunately, this happens to be the night on which three dangerous lunatics have escaped from a nearby institution. Three dangerous lunatics who kill three clowns and take their place. Casey (Winters) has a major fear of clowns anyway, so when he starts seeing the creepier-than-usual clowns near his home his warnings aren't heeded. Especially not by the oldest boy (Rockwell). The clowns keep getting closer, and they're not out to make people laugh.

As previously mentioned, this was written and directed by Victor Salva, a director who seems to keep making movies that I enjoy. Clownhouse has a fairly good reputation among horror fans and it's easy to see why. The atmosphere builds throughout, becoming extremely creepy in the second half of the film, and the scares are often developed in a low-key manner as opposed to just making viewers jump (although there ARE jump scares).

The acting from the three lads playing the brothers is just fine. Rockwell, even at such a young age, gives a glimpse of the annoying/charming and cocky persona he would go on to make his signature role in later life, Winters is a bundle of nerves and McHugh is . . . . . . . . the other one (and is perfectly acceptable in the role). The three men playing the dangerous clowns? Well, let's be honest, their performance is made more effective by the fact that they're made up as clowns. Even before It traumatised my generation, we all knew that clowns were just damn creepy.

Clownhouse is a decent, though unspectacular, horror movie that plays nicely on that healthy fear most of us have had at some point - clowns (coulrophobia being the official term for it). Sadly, it's also a movie made all the creepier for all the wrong reasons, and a hard one to watch impartially once you know just what happened on the set. 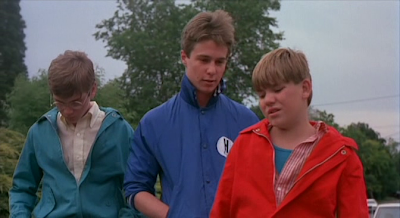