Nope, not the movie. As many Edinburgh residents can't have failed to notice by now, Disney's The Lion King stage musical has rocked up to The Playhouse. Are tickets still available for this show, running until 18th January 2014? Probably, but you may end up spending a bit more because this has been playing to packed houses since it started here on 11th October.


The story is the same as it was in the movie, unsurprisingly, as Simba the lion cub is put in a horrible situation by his uncle Scar and blames himself for the loss of his father, Mufasa (the king). This is all a big power play by Scar, who wants to rule the land and also use some subordinate hyenas to keep everyone in place, and it may pan out brilliantly for him. However, Simba has time to grow older and wiser, with the help of two new friends, Timon and Pumbaa.

So, where do I begin to show my ignorance when it comes to reviewing something of this quality?

Here's the touring cast list, and I apologise for not being able to specifically name-check any of the great actors involved in the show I watched last night. I always miss those opening announcements, either due to bad hearing in my old age or some last-minute excited murmuring from the audience, before the lights dim and a respectful hush descends.

Everyone was good, with the likes of Timon and Pumbaa easily getting most of the laughs, of course. The hyenas were also fun, and Scar was as smooth and menacing as he is in the movie. Other highlights were the characters of Zazu and Rafiki. Simba, Nala, Mufasa et al are all fine, but, as is often the way with Disney tales, it's the comedic supporting cast and the villain getting to steal the show.

Mind you, they have an abundance of visual gorgeousness to compete against, and it's actually the style, colours and sheer creativity that will be seared upon your memory as you leave the theatre. Director Julie Taymor (who gave us the visionary film version of Titus, among others) is the main person to have influenced the adaptation of the movie to the stage, and it shows.

From the opening number - "Circle Of Life" - to the grand finale, this is a veritable feast for the eyes at every turn. And, when sitting in your seats, DO turn. Animals make their way down the aisles and onto the stage as the story begins, while the second half of the show starts off with a variety of birds "flying" to the stage after spending some time over the heads of the audience. There are elephants, giraffes, zebras, and much, much more. It's a veritable menagerie of musical mammals.

As for the sets and scenery, while the show does remains very faithful to the film it flows and makes use of the theatrical trappings beautifully. Two sets, in particular, stand out, those being Pride Rock and the Elephant Graveyard. In line with every other aspect of the production, they give a great sense of grand scale, while also moving smoothly into place wherever and whenever needed.

Perhaps it's not quite as magical and entertaining as Beauty & The Beast, which I was lucky enough to see almost a decade or so ago, but it's yet another triumph for Disney. And, yes, I am very pleased with myself for getting all the way to the end of this review without calling the show "a roaring success." 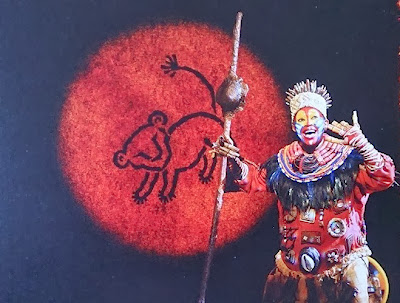