Humanoids From The Deep is ridiculous. It aims to entertain by throwing gratuitous nudity and gore onscreen whenever possible. The acting is patchy, at best, and the titular creatures are a few performers in rubber suits, albeit pretty decent ones. It's hard to really care for any of the main characters and a number of people are introduced for the sole purpose of being maimed and killed by the aquatic humanoids. So it's not high art, by any means, but I ended up enjoying it a hell of a lot. Part of me knows that I should at least have the good grace to look slightly ashamed of this fact, but I'm not. Not at all.

The plot is summed up in the title, really, although there is a bit more to it. There's some animosity and division in a small village as some residents look forward to a change they think will be for the better while some others think that it will have a huge negative impact, there are scientific experiments that you might already have guessed end up affecting some of the sea life and there are various girls who get topless with very little persuading. Okay, the latter isn't a major plot point, but it's a bit of a plus.

Starring Doug McClure (no stranger to fending off men in rubber suits), Ann Turkel and Vic Morrow, the cast all do what is asked of them and keep impressively straight-faced when approached by monsters. Anthony Pena is pretty good as Johnny Eagle, the young man who most vehemently opposes the potential developments in the area, and fans of ventriloquist David Strassman will be amused by his appearance, alongside a very early version of Chuck Wood.

William Martin (using the name Frederick James) wrote the screenplay and Barbara Peeters sat in the director's chair, but that was only convenient until more gratuitous nudity was requested by producer Roger Corman. Peeters didn't think the film would benefit from these scenes, and refused to shoot them, which led to Corman getting someone else (an uncredited Jimmy T. Murakami) to film extra footage. Personally, I think that the film benefits immensely from this decision. It's lowest common denominator stuff, of course, but I can't imagine the movie being half as entertaining without it.

For anyone who wants meaningful, beautiful, classic horror . . . . . . look elsewhere. But if you're after blood, boobs and beasties then this might just be for you. 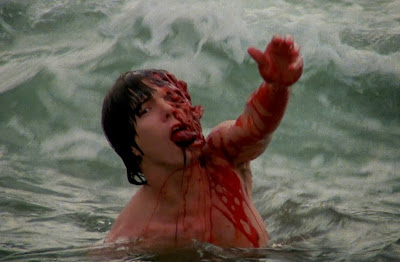