AKA Paranormal Asylum: The Revenge Of Typhoid Mary.

A stumbling, shambolic mess of a movie, Paranormal Asylum is a horror film clearly designed to appeal to as many people as possible, inevitably failing to please anyone. The title itself is designed to grab the Paranormal Activity fans, of course, and then there are the many moments that place the film in "found footage" territory. Sadly, the movie doesn't even have the courage of its convictions, which leaves the camerawork moving between cinema verite and a more traditional movie style.

Aaron Mathias plays Mark Goodwin, a young man who is setting out to make a film with his long-time friend, Andy (Nathan Spiteri). Mark tried his luck in L.A. for a number of years but that didn't work out. Andy may not have moved upwards with his career, but he's certainly had success in his love life, somehow managing to find and keep hold of the lovely Michelle (Laura Gilreath). I've just spent as much time making you care for these main characters as the movie does, and I'm not about to spend much more time and energy on them.

Director Nimrod Zalmanowitz spends most of the movie reminding unfortunate viewers that this is his first time directing a feature while writers Gregory Scott Houghton and Fred Edison seem to spend the entire movie . . . . . . . . taking the piss, to be quite frank. Character decisions aren't just stupid, they're off the scale stupid. As well as the, now obligatory, footage being filmed that is rarely looked over by those doing the filming we get major incidents shown that are never spoken of again. Seriously, who the hell watches someone dragged along by an invisible force and thinks that it isn't worth discussing afterwards? Or who decides not to mention a bizarre suicide that they've just witnessed?

It's hard to criticise Mathias, Spiteri and Gilreath too much, knowing the poor material that they had to work with, but I'll allow them to share the blame anyway.The performances onscreen range from the not too bad, such as Grace Evans, to the generally awful, the three main leads, to the mind-bogglingly bad - poor Boomer Tibbs, for example.

Paranormal Asylum is one to avoid at all costs. Well, one to avoid until you have enough beers in, some snacks and the urge to see something laughably bad. 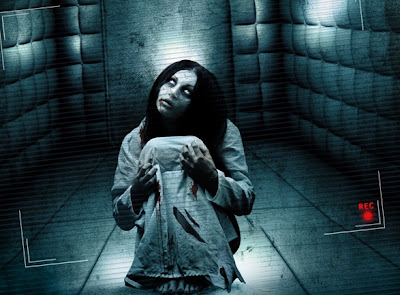