I've said it before and I'll say it again, I just don't understand how Tobe Hooper managed to create something as fantastic as The Texas Chainsaw Massacre. Nothing else that he's directed has even come close to showing any sign of talent. Poltergeist has the fingerprints of Spielberg all over it, no matter who the actual director was. Lifeforce is a movie I love and hate in equal measure (the new Bluray release - here - is essential). Invaders From Mars was a terrible remake, Crocodile was average, Mortuary was okay and only Toolbox Murders managed to keep me thoroughly entertained from start to finish.

The Funhouse has a fair number of fans. It's a fairly simple premise - a bunch of young 'uns decide to stay in the titular funhouse after the fair winds down and end up getting in a bit of trouble - but it has great potential. Unfortunately, Tobe Hooper (working from a script by Lawrence Block) fails to deliver on that potential.

There are some things here that work. The atmosphere and visual style of the carnival is among the very best to be put onscreen (up there with the great carnival fun of Ghoulies II) and there are some great prosthetics used to create one particularly memorable character.

Unfortunately, that's about it. The cast are okay, I guess. Elizabeth Berridge is a decent, albeit bland, nominal lead, and she's surrounded by a bunch of people that I couldn't bring myself to care about. It's not all their fault. That script by Block is strong when it comes to the full-on carnival moments but weak when it comes to the main characters.

It's also a film that's not that scary for a horror movie. Of course, that's not always the worst crime for a horror movie to commit (as strange as it seems), but this just doesn't have enough going on to keep viewers engaged. The first half of the movie is, to put it bluntly, pretty boring. When things start to actually happen it's still not as exciting as it could/should be, with Hooper seemingly reticent to add any tension or draw out any potential set-pieces. And the less said about the finale, the better.

I may well give The Funhouse another try some day, it's certainly not bad enough to completely dismiss and I still ended up buying the impressive Bluray from Arrow, but for now I am standing with the other people I know who just didn't get the love for this one. Give it a watch and see where you stand. 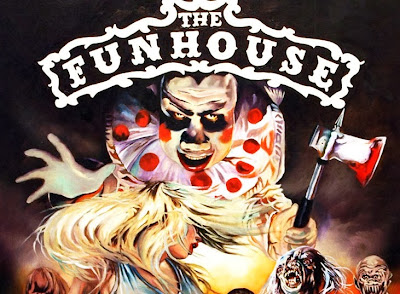