A horror anthology movie with a nice streak of black humour weaving through most of it, Terror Tract sits very much in a safe middle ground when compared to other films of its ilk.

John Ritter plays Bob Carter, a real estate agent showing some lovely homes to Allen and Mary Ann Doyle (David DeLuise and Allison Smith). Bob Carter is a charming, decent man but he may just be a bit too honest for his job. He ends up telling the Doyles a story in each house that they visit, a story about the people who previously owned the property. There don't seem to be too many happy endings.
House/tale 1 - Sarah York plays an unfaithful wife who is about to be caught out by her husband, played by Fredric Lehne. Carmine Giovinazzo is the lover caught in the middle of a very nasty situation and Wade Williams is the local law enforcement who starts to suspect that something is amiss.
House/tale 2 - Bryan Cranston finds his life turned upside down by a vicious monkey. Yes, you read that right. Bryan Cranston vs. a monkey.
House/tale 3 - A young man (Sean Estes) tries explaining to a doctor (Brenda Strong) that he seems to have some psychic link to a serial killer. The doctor is, understandably, on edge and wonders whether or not the young man actually IS the killer, dissociating himself from his actions.

The downside of Terror Tract is that none of the individual tales are that great. The second tale is the best, mainly because, as I may have mentioned, it has Bryan Cranston vs. a monkey, but this is an anthology movie lacking that one great story that everyone can pick as their favourite.

The acting is solid from everyone, the script by Clint Hutchison is okay, if a bit flat, and the direction from both Hutchison and Lance W. Dreesen is competent, if unremarkable. Where the movie excels is in the wraparound content. Ritter is as much fun as he usually is, DeLuise and Smith are both very good and things build up to a final sequence that shows how much better the rest of the movie could have been if it had managed to maintain a more consistent tone from start to finish.

It may not make your list of "best anthology movies ever" but Terror Tract is an enjoyable enough watch, boosted by a sense of fun and some decent performances. Don't make it a top priority, but do try to check it out some time. 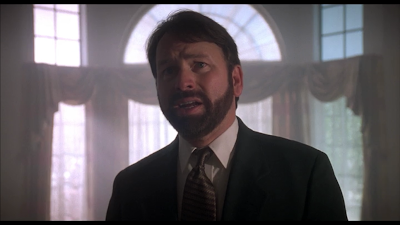