The past year has seen quite a selection of animated horror movies aimed at kids. We've had the surprisingly amusing Hotel Transylvania, the easy-to-adore ParaNorman and this one, Tim Burton's expansion of his own short movie. The fact that they all appeared was a pleasant surprise. The fact that they were all good-to-great is unbelievable. Which all helps to illustrate how great Frankenweenie is when I say that it's the best of the three.

The story is quite a simple one. Young Victor Frankenstein (Charlie Tahan) loves his dog, Sparky, almost as much as he loves science. So when his dog is prematurely sent to the great big kennel in the sky, Victor attempts to reanimate him. And he does. Sparky may have a few minor problems to sort out (the electricity in his body isn't very safe for others and parts of him sometimes fall off) but he seems to be pretty good, otherwise. And at least he's alive. It's not long until others start to suspect that Victor is hiding something, and they want a part of it.

Written by John August (based on the short film written by Leonard Ripps, that was based on the story idea by Tim Burton), Frankenweenie is sweet without ever seeming sickly, it's smart without ever seeming smug and it's consistently amusing without ever highlighting the comedy. It's also a typical Tim Burton movie while also not feeling entirely like a Tim Burton movie. I think that's due to the fact that despite this being a tale of death and misadventure it never really feels as if it's dwelling on any macabre details, despite the fact that they are strewn throughout the movie.

The vocal cast - Tahan, Catherine O'Hara, Martin Short, Winona Ryder, Martin Landau, and others - all do great work, but it's the animation, unsurprisingly, that really makes this a winner. Every character is memorable, every scene has numerous little details to spot and Vincent Price fans will just love the character of Mr. Rzykruski, designed to look very much like the great man himself..

If you want a modern day Universal horror movie aimed at kids that features a windmill (that may or may not end up burning at some point), an Igor character type, thunder and lightning, some mischievous sea monkeys and plenty of heart, then this is the film for you. 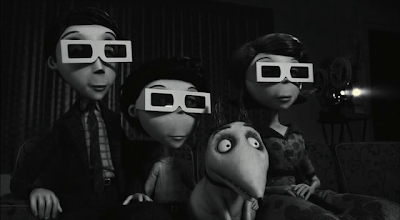