A young woman (Domini Blythe) steals away children for her vampire lover (Robert Tayman), much to the obvious dismay of her husband (Laurence Payne). When he gets the locals with him, it soon becomes a standard mob situation. The woman is punished and then driven back into the castle of her lover, to die with him as it is set on fire. Some years later, the local village is suffering from a mysterious disease. It is quarantined and left to rot away while the inhabitants struggle to find a cure and end their bad luck. They believe it is a curse, laid upon them by the vampire they defeated. When a travelling circus breaks through the quarantine it at first looks set to bring some much-needed cheer and distraction to everyone, but it soon becomes clear that they have other reasons for visiting the area.

While there are some familiar faces onscreen here (with Thorley Walters being probably the one most recognisable to Hammer fans), this is very much a film populated by lesser-known names on both sides of the camera. Adrienne Corri makes quite an impression as the gypsy woman leading the circus into town, young John Moulder-Brown isn't too bad and Dave Prowse is strong and silent as the Strongman, of course.

The screenplay by Judson Kinberg doesn't have much in the way of great, memorable dialogue, but it does have a selection of nice ideas throughout, nicely executed by director Robert Young. Those ideas include a fantastic routine between a circus man and a feral woman fighting/dancing with him, some interesting use of mirrors and the fun being had by some of the circus performers before they show their true colours.

The mix of vampirism and carnival atmosphere should be a winner, but the film never takes off. It's surprisingly flat throughout, before spoiling everything with a finale that just throws together too many silly moments to make it worthwhile. As the end credits roll, viewers will be left feeling majorly dissatisfied. Which is never good. 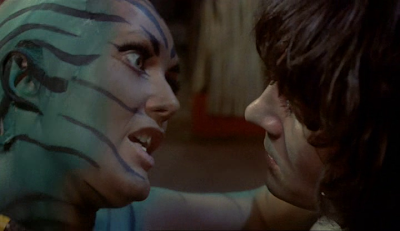