A Hammer horror movie starring both Peter Cushing and Christopher Lee. People who know me will know that as soon as The Gorgon started I suspected that I was on to a winner.

Cushing plays Dr. Namaroff, a man who has seen a number of strange deaths in his village. He's not, however, doing anything to draw attention to those deaths, despite the protests of his assistant, Carla (Barbara Shelley). As the villagers, and local law enforcement (led by Inspector Kanof, played by Patrick Troughton), stay on edge, more bodies start to turn up. Bodies of people who have been turned to stone. Richard Pasco plays a young man who may be next in line to get petrified, literally, but he might do okay if he heeds the advice from the visiting Professor Karl Meister (Christopher Lee).

Written by John Gilling (based on the story by J. Llewellyn Devine), The Gorgon is a pleasant surprise for a number of reasons. First of all, let's be upfront here, it should be ridiculous. A movie that's possibly about a gorgon in more modern times - well, it's set in the early 20th century - is something that viewers shouldn't be able to just watch without using all of their energy on the suspension of disbelief. But Gilling just keeps things rattling along so enjoyable, with enough ambiguity, that picking it apart is never a priority.

Terence Fisher directs with his usual style and technical competence. He makes the most out of every set (which are all up to the high standards set by the better movies in the Hammer horror filmography) and creates a nice blend of the melodramatic and the ethereal as the plot unfolds.

As for the cast, Cushing and Lee are both fantastic. The only downside is that they don't share the screen together for more than a minute or two. Shelley is a delight in what may be her best role from the many she was given by Hammer, and Pasco is a decent enough, if slightly bland, potential hero. Troughton is consistently brilliant as the Inspector obeying orders weighted by money more than the law of the land.

The Gorgon falls just short of greatness, simply because the premise is, as a Monty Python character might say, "a bit silly" but it's well worth your time and surprisingly entertaining from start to finish. If you end up hating it then I'll accuse you of being made of stone (*badump-tsshhhhh*). 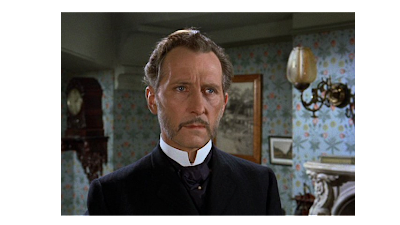