The Wrong Turn franchise has proven, surprisingly enough, to be a consistently enjoyable series of movies. Each film takes the standard killer hillbilly horror archetype and just has fun with it, which makes for something hard to hate, even when standards slip below par.

This instalment has writer-director Declan O'Brien back in the main role, a man who may have made a mis-step with the third movie, but has shown how suited he is to the series since he started working from his own scripts.

The plot is as slight as it is illogical and enjoyable. A bunch of young folk turn up to enjoy the Mountain Man festival in West Virginian one Halloween and end up getting busted by the local Sheriff (Camilla Arfwedson). That would be bad enough, but they also end up being targeted by some killer cannibals. Their chances of survival may improve if the leader of these particular mountain men (Maynard, played by Doug Bradley) is released from the jail cell alongside their own.

The cast aren't too bad. Arfwedson is a little weak as the Sheriff, the group of youngsters (including Simon Ginty, Oliver Hoare, Paul Luebke, Roxanne McKee and Amy Lennox) all do enough to get by and Bradley has a lot of fun in his best role in some years, from the few that I've seen anyway. The script gets slightly carried away when it comes to his ramblings, but that's forgivable.
With a cast of disposable characters, the setting of a small town in which everyone not involved in the main story disappears within the first 20 minutes and gory set-pieces, this is a movie that puts fun ahead of everything else. Some of the deaths are quick, standard fatalities, but some are truly memorable, either due to nastiness or inventiveness or both.

If handled properly, I see no reason why this franchise can't squeeze out an extra one or two instalments. Who knew that all these Wrong Turns would make something right? 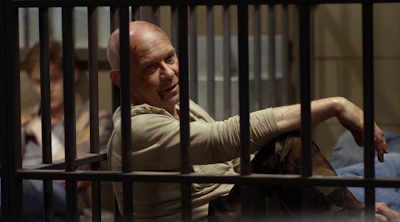