It's another movie from The Asylum and it's another low-budget zombie movie from some global production line that seems to do nothing more than churn out low-budget zombie movies. And yet I keep watching, because if a movie has a zombie in it then I'll give it a go. A lack of budget CAN be a good thing when the director and crew find other ways to cover their shortcomings. Of course, that's rarely the case with movies from The Asylum. They not only fail to cover their shortcomings, but they coat them in neon paint and place them in position to be seen by all and sundry. I love and hate them in equal measure.

In Zombie Apocalypse there's been a bit of a zombie apocalypse, as if you couldn't have figured that out from the title. The opening of the movie isn't too bad, sketching out a timeline of events and showing things on a global scale. Sadly, it's all downhill from there. Viewers are forced to spend time with some of the worst survivors of a zombie epidemic that I can think of. One of them is played by Taryn Manning, none of them would be alive if this movie was trying to provide a semblance of reality. It's okay, however, because they're soon joined by a group that includes Ving Rhames, and we all know that Ving Rhames is a bad motherfucker who can fend off zombies. These people then wander around, killing zombies and making a number of bad decisions, until they meet more people. Then they all wander around some more, aiming for a dock that should allow them to catch a ferry to their ultimate destination. Because there's nothing more reliable in the midst of a zombie outbreak than a scheduled ferry service.

Nick Lyon is the man trying to lead from the director's chair, but he's hampered by the script from Brooks Peck and Craig Engler. Scripts have never been strong in movies from The Asylum so it's hard to hate Peck and Engler for not rocking the boat. It's just a shame that they made the movie so dull. A few CGI-enhanced deaths in the opening scenes provide a bit of fun, but they soon become tiring when you start to spot the same special effect being used again and again (which is also another signature move from The Asylum).

As for the cast, Manning seems to be fleeting in and out of a vegetative state for most of the movie, Rhames repeats some of his standard tough guy act, and the likes of Eddie Steeples, Gary Weeks and Johnny Pacar try to look handsome and/or strong and/or vulnerable while Lesley-Ann Brandt, Lilan Bowden and Anya Monzikova try to look pretty and/or strong and/or vulnerable.

This is not the worst zombie movie ever made, by a long shot, but that says more about the amount of shockingly bad zombie movies out there than it does about the quality of this one. Zombie Apocalypse might be an adequate time-waster for you, but only if you've exhausted ALL other possibilities. 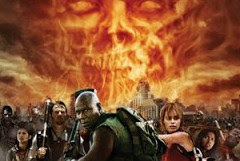