Vampire movies are much like the creatures themselves, just when you think they've been killed a drop of fresh blood comes along to bring them back to life. Well . . . . . . undead life. You know what I mean. There have been some very good vampire movies in recent years to reassure any horror fans who thought that the subgenre had been sentenced to death by sparkles.  Just last week I highly recommended We Are The Night and now I can highly recommend Kiss Of The Damned.

Josephine de la Baume plays Djuna, a vampire who tries to live in harmony with humans. She keeps her emotions in check and hunts animals to quench her bloodthirst. That delicate balance is threatened when she meets, and falls for, a young man named Paolo (Milo Ventimiglia). Things are almost completely turned upside down by the arrival of Mimi (Roxane Mesquida), Djuna's sister. Mimi likes to feed when she can and likes only the best blood that she can get down her throat - human blood.

Written and directed by Xan Cassavetes, Kiss Of The Damned movie is a vampire movie steeped in the fine tradition of many that have come before it. There are many moments that are inarguably sexy, but there are also just as many moments that remind viewers of the bad side of being a sexy vampire. The addiction, the aftermath, the analogy of vampirism as a STD. The aesthetic of the film, as many others have already noted, is a blend of Jean Rollin and The Hunger, with that favourite trope of the subgenre, the brat who doesn't seem able to maintain self-control.

The cast are okay, with de la Baume and Mesquida making up for their weaknesses with their general air of European savoire faire, and Anna Mouglalis and Riley Keough doing great work in much smaller, though no less impactful, roles. As for the men, Milo Ventimiglia is very good as Paolo. The script makes his integration into the world of Djuna a smooth and believable one, and Ventimiglia seems just as easygoing and adaptable as the character needs to be. Michael Rapaport does well in a supporting role, but he's one of the few people ill-served by the script, his character feeling (albeit rightly so) that he's wandered in from another movie altogether.

Kiss Of The Damned is a quality film. It tries to throw one or two enjoyable surprised into the mix, it's never dull, the blood gets to flow and there are a few scenes that are, as mentioned above, just downright sexy. It's a very traditional mix of vampiric moments that Cassavetes somehow manages to make seem more than just tired, stale cliches. 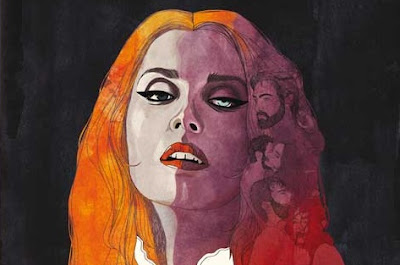