Written and directed by Johannes Roberts, F (released in America as The Expelled), is a low-key horror movie that springboards from a "hot button" social issue and develops into something surprisingly memorable and chilling. One of a number of "hoodie horror" movies released in recent years, this stands out from the pack thanks to the execution of the material.

David Schofield (who, to me, will always be THAT dart player from An American Werewolf In London) plays a teacher, Mr. Anderson, who ends up being assaulted in his own classroom by a pupil. Moving forward to almost a year later and Mr. Anderson is a broken man. He's separated from his wife, scared of every shadow, barely keeping his job and only able to force his daughter (Eliza Bennett) to spend time with him by giving her detention. His paranoia means that nobody takes him seriously when, one evening, he starts to suspect that the school is being targeted by some particularly menacing kids.

Roberts may have created a lean, effective script but it's what he does with the material while bringing it to life from the page that shows his strengths as a director. The camerawork is smooth, with a number of scares created subtly in the background of the shot, and the score becomes more and more haunting and downright spooky as the horror of the situation becomes clear to those caught up in it.

Schofield is as great as you'd expect him to be, but the supporting cast all do pretty solid work alongside him. Bennett is stuck with being a slightly annoying teenager, but the character has good grounds for her rebellious behaviour and the whole stroppy act doesn't feel overdone. Emma Cleasby, Ruth Gemmell, Finlay Robertson, Max Fowler et al do just fine. The only person who struggles is Roxanne McKee, not through any fault of her own. McKee seems to be onscreen as a visual aid, not that I'm complaining too much, but her character - a very pretty P.E. teacher who spends time after the standard school day working out some more before hitting the showers - is the least believable of the lot.

Choosing not to spoonfeed viewers, F instead decides to leave certain elements unexplained, preferring to leave people with plenty to think about after the end credits roll. Some people won't like that. They'll want more backstory and more answers. I really appreciated it, and think that it's this non-conformist approach that takes F up a grade (no pun intended). 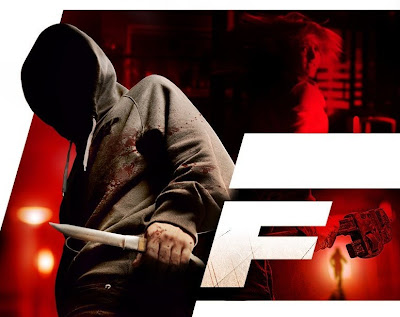