A horror comedy written by Tim Doiron and directed by April Mullen, Dead Before Dawn (or Dead Before Dawn 3D if you happen to see it in 3D) is enjoyable enough but suffers from constantly trying too hard. The characters are slightly over the top, the premise is taken that little bit too far (albeit with amusing effect) and many of the jokes feel forced, either thanks to the chain of events leading up to the punchlines or simply the techniques used in the camerawork and editing.

Devon Bostick plays the lead character, a young man named Casper Galloway who finds himself in a bit of trouble when he's tasked with minding his grandfather's store one evening. The store is filled with all kinds of strange objects, including one particular receptacle that will curse anyone who breaks it in a very specific way. In fact, those present when the receptacle breaks end up creating the curse themselves. Some friends and associates may think that they're having fun when they come up with the craziest, scariest curse they can think of but Casper is petrified. Will he, and the others, make it through the night? Or will the curse - which makes everyone they look at commit suicide and come back as a zombie demon (zemon) - not actually come true? Look at the title of the movie and figure that one out for yourself.

Bostick is good fun in the lead role, and there's decent support from Martha MacIsaac, Brandon Jay McLaren, Brittany Allen and also director Mullen (with a fun, though very small, role for Christopher Lloyd). The style of acting may be slightly over the top and goofy, but it suits the way that Mullen and Dorion have decided to treat the material.

The earlier scenes are the best, before the characters realise that the curse has actually begun. Seeing the characters interact with people who then rush to commit suicide is both darkly comedic and also quite eerie at times. But once that warped gag is used a couple of times it becomes tired. Then it's used again and again while the zemons start to rise and scare the lead characters, despite the fact that they never really feel like a viable threat.

Light, harmless and enjoyable enough, Dead Before Dawn falls far below the standard set beside so many other horror comedies over the years. It's worth a watch, I guess, but it should never be a top priority. 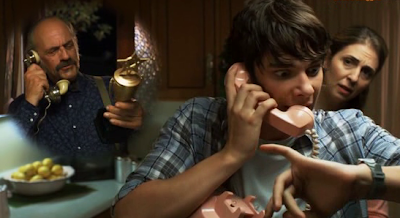